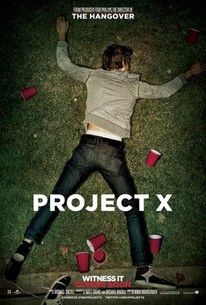 Big Boy
as Himself

Jillian Reynolds
as Herself
View All

The movie has all the heft of a tweet, but Philips has made it look pimp and, until the police end the party, Project X really is a riot.

Ultimately, Project X is an example of why gimmicks rarely work, especially once the new shine has worn off.

"Project X" bears a cravenly piggish attitude toward rewarding socially unacceptable behavior that feels unseemly rather than exciting, so-what rather than so-funny and obvious instead of new.

"There's a midget in the oven!" is about as inspired as the dialogue and set pieces get in this queasy-making entertainment about a 17-year-old dude's birthday bacchanalia.

The parent and homeowner in me were appalled by the debauchery and incredible property damage. The teenage boy in me couldn't help but smirk anyway.

With its cast of unfamiliar faces and catalog of underage wish-fulfillment fantasies, this game-changing instant classic will doubtless inspire imitators.

While the film does have moments that I appreciated, I found most of it to be rather silly and way too over the top.

Hateful characters, a ridiculous story and mediocre direction - that's what Project X has to offer you.

A found footage-style examination of high school culture that successfully manages to sink to the lowest depths of entertainment.

This is the most nausea-inducing, offensive, sad, pedestrian, sophomoric waste of time I have ever witnessed. On occasion, I write that if I could have walked out of a movie, I would have. This time I did.

A politically-incorrect and surprisingly uneven teen comedy that 20-somethings will likely enjoy.

This was mental although slightly interesting, it doesnt offer much entertainment wise!

Project X is a horrible excuse for a comedy film. The film is crude, obscene and void of genuine laughs or good entertainment value. Right off the bat, you don't sympathize with the characters and you don't care about them either. A few lines made me smile, but overall this is one weak comedy and it doesn't stand out whatsoever. There's no thought in what went in to making this film and it seems as if the film's idea was drawn up on a napkin and studio executives were like "oh let's make a film with teens partying and drinking their asses off!" This is a dreadful movie that relies on teen party clichés for its plot. The film could have been much better, and it just ends up being a pointless mess from start to finish. To me this is just the bottom of the barrel of entertainment. I advise you if you consider watching something else if you come across this piece of crap. This is one film that never should have been made. I despised this one like the plague, and if you want a better party oriented film, watch Superbad, at least that one had great jokes, a good cast and plenty of terrific chaos that actually was hilarious. The only comical bits here are the parts where the Mercedes gets driven into the pool and the guy crashing the party with the flamethrower. Project X is a mess pure and simple, and it is definitely not a smart comedy. This is one of the worst films of 2012 and it is a film to definitely avoid.

This movie sucks; big time. Some of the chaos that occurs in the film's final forth was pretty entertaining, but that isn't saying much. "Project X" is the most unlikable movie I've seen in ages. The characters, the endless montages, and the (failed) humor; all trite.