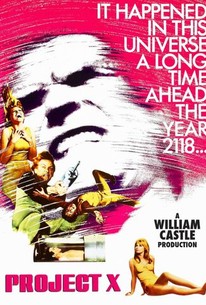 Project X boasts better special effects than usual for tight-fisted producer/director William Castle, but it crumbles in the story department. Christopher George is a secret agent living in the year 2118, who through a complex scientific charade is convinced that he's living in 1968. The plan is for George to uncover a secret germ formula that had been hidden away 50 years earlier. Castle's propensity for borrowing gimmicks from earlier films is well known; this time he reaches back as far as a nearly-forgotten 1954 episode of the TV series Flash Gordon! The biological warfare throughline of Project X was more convincing in its source material, a novel by Leslie P. Davies. ~ Hal Erickson, Rovi

Ed Prentiss
as Hicks
View All

There are no critic reviews yet for Project X. Keep checking Rotten Tomatoes for updates!

There are no featured reviews for Project X at this time.