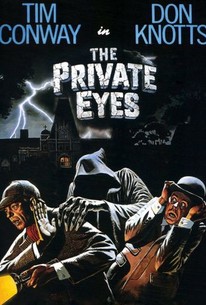 Tim Conway and Don Knotts play two bumbling Scotland Yard investigators out to solve a double murder in this silly send-up of vintage, "old dark house" films. The intrepid Winship (Knotts) and his assistant Tart (Conway) arrive at a Gothic mansion occupied by the grieving heiress Phyllis (Tricia Noble), whose parents have just perished under suspicious circumstances. Meanwhile, a quirky crew of servants ranging from a butler with serious rage issues to a samurai warrior cook and busty maid with a bubbly personality all display likely motives for murder. As a mysterious, black-cloaked killer methodically dispatches with the help, the inept investigators search for clues while being watched by paintings with moving eyes, exploring a frightful a torture chamber, and attempting to communicate with their superiors at Scotland Yard via carrier pigeons who never seem to reach their intended destination.

Critic Reviews for The Private Eyes

Audience Reviews for The Private Eyes

A ridiculous little mystery comedy staring two master of ridiculous movies. If you enjoy their humor you'll like this more than I did, but if not, skip it. The movie is incredibly cliched. I knew who dun it when they got their first clue.

Now THIS is what I'm talking about. THIS is how you do a spoof. Unlike today, where "spoof" movies copy shots from popular movies and attempt to make a joke of them, this movie spoofs an entire genre by honoring it. Don Knotts and Tim Conway were a great comedy duo. Knotts was forever the straight man, and Conway is one of the great improvisational comedians the world has ever known. Here they play two bumbling detectives investigating the murders of a rich English couple. We get the usual motley collection of suspects, the creepy castle setting, secret passages, trap doors, and a mysterious, shadowy figure who may or may not be responsible for everything happening. Not only is the movie funny, but it also provides a genuine mystery. The setting is fantastic, the characters are interesting, and the two lead actors are at the top of their games.

A lot of lost potential here. The poems/clues the murderer/ghost leaves for the detectives are slightly funny. All the jokes are groaners. I might have appreciated the movie more when I was younger. The plot is a mess. Knotts and Conway had partnered in Disney comedies with this type of humor a few times during the 70's. The success of this type of comedy had ended by this decade though.

Lord and Lady Morley have been murdered and even worse, Inspector Winship (Knotts) and Dr. Tart (Conway) are on the case. Sent in by the yard to investigate, Tart and Winship are on the prowl to catch a killer that is staying right in the Lord and Ladies manor. They also received a letter from Morley AFTER he was dead. Say what? Somethin' a funny's a brewin' here? At the Morley mansion the private eyes meet the staff of the house, including a bimbo maid, a gypsy caretaker, a hunchback stable groom, a nutty butler, and a seductive mistress. One of these people is the killer?but who? Tart and Winship continue to piece together the mystery by questioning the staff and crew. But as the night wears on the bodies start piling up as one staff member after another is picked off by a mysterious shadow lurking in the dark. Time starts running out as the two men bumble and stumble their way through the house looking for clues in the form of notes left by the killer. But will they find the fiend in time, or will Tart, Winship, and the rest of the manor end up as yesterday's leftovers? I saw this as a kid and loved it. Its still hold up as a lite and fun film for the entire family. No bad words (one is implied, but not spoken) totally clean for the whole family. One scary part for kids younger than 6 or so, if you want to censor it, have your kids leave the room when they go outside to dig up the body. You have plenty of warning, they are in the crypt for a while before they open the coffin. It is written by Tim Conway, and of course stars Tim Conway and Don Knotts. Some of my favorite lines are "for a short person, you have long sentences" and Tim Conway's rambling "I think that someone doesn't want anyone to know that there may be someone here that might be someone that's a killer" line still gets me laughing! Highly recommended to anyone in search of a fun film