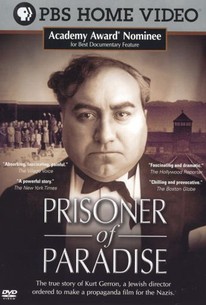 A chronicle of the true story of Kurt Gerron, a well known and beloved German-Jewish actor, director and cabaret star in Berlin in the 1920's and '30's. Among his greatest accomplishments, he co-starred with the legendary Marlene Dietrich in the film classic, "The Blue Angel." He also sang "Mack The Knife" in the original production of "Threepenny Opera." Ultimately, Gerron was captured and sent to a concentration camp, where he was ordered to both write and direct a pro-Nazi propaganda film.

Kurt Gerron
as Himself

Critic Reviews for Prisoner of Paradise

A good example of a film that lets one person's life tell higher truths about a major time in human history.

An engrossing documentary about one of the least known and most unexpected aspects of the Nazi war against the Jews.

One of the more bizarre Holocaust stories comes to light in the impressive, handsomely made Prisoner of Paradise.

It can be hard to conceptualize mass murder, but using the media to lie is a concept we're all quite familiar with in this day and age

Directors Malcolm Clarke and Stuart Sender tell this story dispassionately, letting it evoke pity without asking us to see Gerron as a hero.

Excels is in its interviewees and the range of its historical images and information.

An extraordinary documentary about the German entertainer Kurt Gerron.

It's a testament to the power of the documentary that we're still rooting for him, even when Gerron has sold his final few shreds of decency to the devil.

Audience Reviews for Prisoner of Paradise

There are no featured audience reviews yet. Click the link below to see what others say about Prisoner of Paradise!