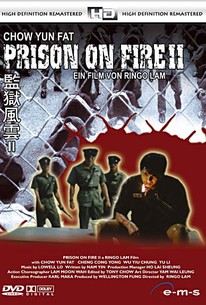 Ringo Lam follow up on his smash-hit prison flick. In this go around, the Stanley prison is in the throes of an ugly turf war between native Hong Kong cons and Mainlanders. Chung (Chow Yun-fat) befriends Brother Dragon (Chen Sung-yung), the boss of the Mainland inmates, allowing him better treatment than other Hong Kong prisoners. When Chung's mother dies, his son is shipped off to an orphanage. The new chief of security, Zau (Tsui Kam-kong) refuses to give Chung a furlough to see his son. So Chung jumps ship, and later surrenders himself to the warden. Enraged, Zau savages his charge. When Dragon is accused of murder, his escapes, and soon Chung is framed for ratting out the Mainland crime boss. When Chung manages to escape again, planning to flee to China with Dragon, he can't help but visit his son, where the cops lie in wait.

Victor Hon
as Superintendent
View All

There are no critic reviews yet for Prison on Fire II. Keep checking Rotten Tomatoes for updates!

This one is weirder and doesn't find moments of calm to be precious like the first one. Police brutality starts out so bad and so public, it's amazing they didn't shut down the whole prison. (In fact, the last second-in-command got canned for it.) Prison violence is much more deadly; they finally have shivs. The comic relief has downgraded to clown acting in the mix; it's not relief from the suspense, most of which comes from Chow Yun Fat's just barely not getting caught 10,000 times during a chase. Bad guys are more caricatures than before, although the wormy slime of Skull comes across vividly. The end of the movie has a very dark surprise that winks at you while holding out the noose.

Not quite as good as the first, with much more humor, but still worthwhile.