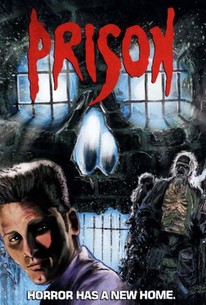 In this horror outing, prison inmates are terrified when the corpse of a recently killed prisoner rises up and begins hunting the guards who wrongly engineered his death.

Prison is a gritty and gorgeous horror flick that's not only well acted and engaging but also delivers some shockingly fun and grisly deaths.

A horror film in which staging gruesome deaths becomes a lame substitute for creating tension and eeriness.

Has its limited prison-grime charms, but nothing for the horror freaks to write home about.

Renny Harlin's second feature is a well made supernatural horror film that is much better than what you'd think. Sure, the film looks a bit dated nowadays, and there's been far better ghost tales than this, but in the long run, Prison is a surprising, accomplished film that is an obscured genre film that should see the light of day. The cast do a good job here, but the standout aspects of the film are the special effects, the kill sequences as the supernatural force kills prison inmates and guards alike. Renny Harlin, who has a checkered career, pulls off a good, entertaining and enjoyable ride. This is a pleasant flick to watch for horror fans that enjoy a good ghost story. Although there's never anything truly great on-screen, there are enough good bits here and there throughout the film to make it an enjoyable yarn to simply sit back and enjoy. The plot was original and it's what kept me interested in the film, unlike Kevin VanHook's Death Row, which uses basically the same premise as this movie, this is a far better film that is good gory fun. Despite its lacking acting, the film is held together by effective directing for Harlin. If you're ever looking for a fun little obscured gem of a horror tale, then pick this one out. The film is not perfect, but it has enough going for it to make it a worthwhile good time for genre fans. What makes this film good is the fact that you never see the supernatural force itself, and it leaves it up to your imagination to guess what kind of demented, evil supernatural force is terrorizing the prison. We know it's the prisoner that wants revenge, but you never see him, thus it makes for a more enjoyable viewing as it keeps you guessing till the very end.

Harlin's first theatrical effort quickly establishes his garish stylistics choices such as a POV tracking shot to the electrical chair. It also adheres to his sound-and-fury-signifying-nothing sensibilities wherein the inmates are besieged by a barrage of loud pyrotechnics without a plausible reason since the ghost's only objective is murdering the newly appointed warden. It's all swiftly paced and tautly photographed, but the midsection is a sluggish going-through-the-motions initiation into penitentiary life such as rivalries, riots and sage advice about having "the face of a lifer". But like the 'Final Destination' movies, it's arduous to be frightened by an incorporeal Grim Reaper firing a gun turret and wrapping razor wires around a sadistic guard. 'Prison' retains Harlin's whizz-bang shepherding, but it's a vapid, spineless revenge story with corridors that imitatively resemble Freddy Krueger's boiler room.

At first I doubted that I'll enjoy this movie very much, but as it went on the movie kept on getting better and better. It's about an evil spirit trapped in a prison after his execution that wanted revenge. I loved the elements of horror in this and the deaths very quite constructive too. Barbed wire one was my favourite. Overall a pretty intense horror flick with a variety of characters and lots of deaths. Though I was quite confused about the connection between Viggo Mortensen's character to the evil spirit.