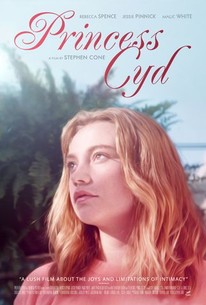 16-year-old Cyd (Jessie Pinnick) decides to take a break from her depressive single father and spend a summer in Chicago with her aunt Miranda (Rebecca Spence), a well-known novelist. Soon after her arrival, Cyd encounters Katie (Malic White), a young barista behind the counter. The two make plans to meet up after Katie's shift and a new, charged relationship begins. The Chicago landscape expands, and we navigate intimate and fragile moments between Cyd and Katie as they explore their new attraction. Miranda functions as a counterpart to young Cyd's new explorations of sexuality and love, and as the summer continues they develop a strong relationship founded on a shared openness and healthy criticism of particular personal moments. Sensitive to the contradictions and confusion of the ever-changing self, Stephen Cone has created a film that reimagines that distinct summer feeling when adolescence creeps in, skin is bared, emotions emerge, and everything begins to feel more complicated.

As comfortable to slip into as an afternoon in the sun, as satisfying as a late-night piece of cake, Princess Cyd is a jewel of a film that plumbs thematic depths far below its surface.

Sometimes the calm between these two women is realistic. But the director often cops out the second his characters get into messier emotions.

Its leisurely quality-its disinterest in "pumping" things up, its focus on the small yet vivid spaces of listening, understanding, struggle, identity-is its greatest asset.

What might have devolved into cutesy odd-couple territory instead moves in unexpected directions, bolstered by a fundamental idealism.

With great delicacy, Cone metes out details about his subjects through refined dialogue and everyday behavior; this is the sort of movie that makes you feel you've befriended the characters.

Not a lot happens in Princess Cyd, but it's hard not to watch this film without feeling changed.

What begins as a breezy, drifting character study subtly transforms into an emotional puzzle in which the answers to some questions come into focus, while others become fuzzier. Welcome to life.

The undervalued director confers a frank grace, letting each of these ideas collide and tangle, and rest among themselves-an exemplary feat of cinema, and one that ought to extend to the world.

Director and writer Stephen Cone gently weaves together a light bright story, with an exception of one dark moment.

Its breezy treatment of sexuality, spirituality and women's relationships in lieu of drama for drama's sake make it a beautifully poignant piece.

The three central performances of Princess Cyd are near flawless and the honesty and subtlety of this tale, which sees hope in the struggles of life at all its stages, is astonishing.

The relationships that Cyd has with Katie and Miranda develop at that perfect pace for when time is short but the days are long.

A mediocre coming-of-age film, Princess Cyd is pretty bland. The story follows a young teenage girl who goes to visit her estranged aunt, an acclaimed novelist, and learns to appreciate her cultured lifestyle. The script isn't written very well and isn't quite sure whose journey this is; the aunt's or the niece's. And the directing is fairly mundane, doing nothing to heighten the drama or add any tension. Princess Cyd is a forgettable film that's rather boring and unremarkable.

Anyone have a copy of "In the Dawn" I can borrow? I really need to know how that shakes out.