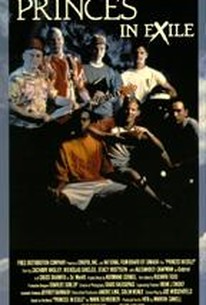 This drama telling the exploits of seriously ill teens who are spending the summer at a camp for cancer victims makes an effort to bring a light touch to this otherwise gloomy subject. In the story, Ryan (Zachary Ansley), who has a brain tumor, is pretty certain he'll die before long. Before he does, he wants to have sex with a woman. Robert (Nicholas Shields), who has leukemia, isn't afraid to perform any stunt or get into any kind of adventure. Holly (Stacie Mistysyn) has lost a leg due to bone cancer, but is interested in helping Ryan fulfill his wish. One of the highlights of the movie is a theatrical in which the campers lampoon their doctors, parents, and one another.

Critic Reviews for Princes in Exile

There are no critic reviews yet for Princes in Exile. Keep checking Rotten Tomatoes for updates!

There are no featured reviews for Princes in Exile at this time.