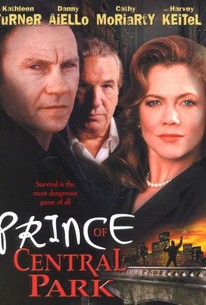 A child discovers a whole new world when he runs away from home in the family drama Prince Of Central Park. JJ (played by Frankie Nasso) is a boy living in New York with his foster mother (Cathy Moriarty). To say they don't get along is an understatement; one day JJ decides he's so tired of her abuse and tirades that he leaves his home for good, determined to make a home for himself in Central Park. JJ soon meets another resident of the park, an eccentric who calls himself the Guardian (Harvey Keitel); while the Guardian seems frightening at first, he soon proves to be a true friend to JJ. JJ also makes friends with Rebecca and Noah (Kathleen Turner and Danny Aiello), a couple who never entirely recovered from the death of their son several years ago. Rebecca and Noah take JJ under their wings, and JJ helps them come to terms with their loss. Prince Of Central Park was the first family film from the production company of Seagal/Nasso, co-founded by stone-faced action star Steven Seagal.

Harvey Keitel
as The Guardian

Larry Clarke
as Cop No. 1

Vincent Rocco
as Cop No. 2

Jessica Feng
as Herself
View All

There are no critic reviews yet for Prince of Central Park. Keep checking Rotten Tomatoes for updates!

There are no featured audience reviews yet. Click the link below to see what others say about Prince of Central Park!