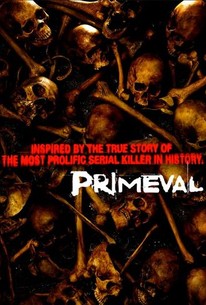 Critics Consensus: Primeval is a low-quality horror film, which due to the inane political messages does not even qualify as campy fun.

Critics Consensus: Primeval is a low-quality horror film, which due to the inane political messages does not even qualify as campy fun.

Critic Consensus: Primeval is a low-quality horror film, which due to the inane political messages does not even qualify as campy fun.

An American news crew travels to one of the most remote locations on the planet in hopes of capturing the savage serial killer rumored to have claimed over 300 lives in this white-knuckle horror-thriller starring Dominic Purcell and Orlando Jones, and based on actual events. As the intrepid documentarians cautiously make their way upriver, they soon find that the brutality inflicted on man by his own kind pales in comparison to the relentless viciousness of mother nature's most resilient predator. ~ Jason Buchanan, Rovi

Thomas Kariuki
as Fisherman No. 1

Azeez Danmola
as Fisherman No. 2

The sub-sub-Anaconda bottom-feeder Primeval makes the mistake of taking itself far too seriously; with its exploitative images of civil war and genocide, it's the Blood Diamond of 25-foot-killer-crocodile movies.

For some insane reason, the makers of Primeval attempted to create a film that blends Anaconda with Hotel Rwanda, and they failed miserably.

Primeval is one of several recent movies to bill itself as 'inspired by true events.' So was this review, though in both cases 'inspired' may be too strong a word.

How capturing an animal found in every zoo constitutes a scoop is beyond me, but when you expect the trio to be knee-deep in blood they are instead wading through politics.

It's this sort of social insight that elevates Primeval above typical marauding animal fare.

Primeval is one of crummiest killer-beast flicks of all time. It actually makes the B.C.-shot giant-croc debacle Lake Placid look half-decent, but it sure the hell wasn't.

Primeval is a slick-looking movie that lacks the gritty goodness of old-fashioned exploitation and is too silly to take seriously as a mainstream thriller.

The possibility of commentary is raised but it ultimately is glossed over with cliches and very little substance.

Laced with pseudoserious undertones, the movie makes "Anaconda" look like a modern-day classic.

As far as giant croc movies it's not the best, but it's definitely a solid entry in the genre with nice production value. It also features the most croc on land attacks of any others ive seen. Not as good as Lake Placid, Dark Water or Rouge

I didnt know it was inspired by the true story of prolific serial killer before watching it. Just trusted my friends review and I was not tiny bit of dissapointed

Only saw this movie once and it instantly became a favorite. I like that it's inspired by true events, and that it's very exciting and suspenseful, but what I REALLY like about it is that not only is there a monster in the form a gigantic croc they're after, but the more they delve into the jungle, they perhaps find an even greater danger in the form of a civil war among their part of the country. The croc and the war among people presents double the punch and excitement, instead of just choosing to be a Lake Placid ripoff.

Fairly successful big croc movie. It follows generic plotlines via generic chracters, but has enough charm to pull it off. Orlando Jones is a great casting choice. His wit elevates the film somewhat, with lines like "This crocs like OJ Simpson. His biggest mistake was killing a white woman". The films biggest fault is setting it's sights too high as it becomes half big croc movie, half social commentary on the political climate in impoverished African countries. These two ideas don't go together that well. Blood Diamond and Lake Placid? Exactly. Lots to enjoy and a decent CGI crocodilian.