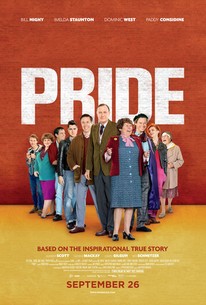 Critics Consensus: Earnest without being didactic and uplifting without stooping to sentimentality, Pride is a joyous crowd-pleaser that genuinely works.

Critics Consensus: Earnest without being didactic and uplifting without stooping to sentimentality, Pride is a joyous crowd-pleaser that genuinely works.

Critic Consensus: Earnest without being didactic and uplifting without stooping to sentimentality, Pride is a joyous crowd-pleaser that genuinely works.

PRIDE is inspired by an extraordinary true story. It's the summer of 1984, Margaret Thatcher is in power and the National Union of Mineworkers is on strike, prompting a London-based group of gay and lesbian activists to raise money to support the strikers' families. Initially rebuffed by the Union, the group identifies a tiny mining village in Wales and sets off to make their donation in person. As the strike drags on, the two groups discover that standing together makes for the strongest union of all. (C) CBS

Lisa Palfrey
as Maureen
View All

Best Reviewed Movies by Genre 2014
Now Streaming: The Boxtrolls, The Drop, and More
New on DVD & Blu-Ray: The Good Lie, The Trip to Italy, and Pride

In its total inspirational sweep, it earns comparison to the movement it chronicles - as an organized, well-calculated piece of political theater.

This film moves effortlessly from some pretty intense dramatic moments to hilarious scenes showcasing the contrasting lifestyles of the gay and straight worlds to some vignettes of incredible poignancy.

This portrayal of the unlikely 1980s alliance between London gay-rights activists and striking Welsh miners is, quite simply, one of the best movies of the year so far.

The important twist is that Pride seems to capture the essence of reality, giving it the recognition it deserves. Truth really is stranger than fiction, and Pride tells that truth with flair.

[Pride] is bright, perky and ostentatiously warm-hearted. I hated almost every minute.

It's impossible to single out one performance. Family feeling animates the whole cast and as the fight against bigotry intensifies, so does the spirit of mutual affection. It's the real thing, Ealing revisited in brighter plumage.

[A] rousing portrait of a key event in history, so much so as to stir feelings of activism and solidarity within the watching audience.

Incredibly written, Stephen Beresford's script not only delivers a heartfelt account of a factual national movement, but also manages to weave in a variety of characters and stories, adding emotional depth to the film.

Warchus has concocted a relatable film meant to cross boundaries and audiences, and thankfully isn't shackled down by its own good intentions.

The very best part of Pride, apart from it committing this heroism to celluloid, is the amazing cast called upon to do so.

It's powerful, glorious, funny and uplifting - a kind of Ken Loach with extra laughs - and avoids being worthy or simplistic.

Brilliantly played and at times very funny, Pride proves that people make history, even if they do so in ways they initially don't understand.

Thirty years after the events depicted, Pride is an inspiring film about the importance of solidarity and courage to fight for justice in our world. Full review on filmotrope. com

Great feel-good movie celebrating solidarity and tolerance. The set-up in the 80s feels authentic, thanks to the fitting soundtrack and costumes. The great acting, especially by Bill Nighy, who has some of the best scenes, makes it enjoyable and very entertaining to follow the characters through their ups and downs. While the second half has a few more serious tones than the first, it also makes the film much more interesting and the mix always works.

A group of gay activists organize a protest in support of Welsh miners who have been victimized by Margaret Thatcher's policies. It's hard to make a heart-warming movie. With too many positive scenes a film can flounder for conflict and fail to progress. But Pride manages to be thoroughly heart-warming and keep moving. The film progresses from intra-group interpersonal conflicts, which are funny and occasionally moving, to inter-group awkwardness, which are just as funny. The film's serious moments don't ward off its charm, and the cast is equally accomplished throughout. Overall, this is an excellent, uplifting film.

Thought-provoking, although however bleak at times, "Pride" is one of the oddest films of 2014. Normally a film about Gay rights is endearing even if you do not agree with it, and this film does that once again; However, I felt that it was a very one sided film at times. They mention the opposing side a few times, but it is more of a statement than a respect to the true story. Don't get me wrong, in the end, I thought this was a great film. Well-made all around and smartly scripted, "Pride" delivers in all it's goals, but falls short to those without an open mind, in which I would not recommend. I myself have a very open mind and a broad outlook on life so films like this intrigue me. I think my problem with the film was that once the credits began, I felt no different about the matter than I did before my viewing, but I admired the hell out of what was on screen. "Pride" is soulful, but lacking in other areas.