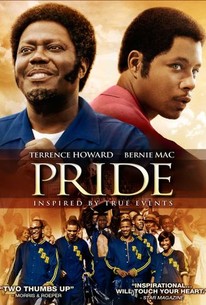 Critics Consensus: Pride features a typically stellar performance from Terrence Howard, but ultimately falls victim to its over usage of sports movie clichés.

Critics Consensus: Pride features a typically stellar performance from Terrence Howard, but ultimately falls victim to its over usage of sports movie clichés.

Critic Consensus: Pride features a typically stellar performance from Terrence Howard, but ultimately falls victim to its over usage of sports movie clichés.

The year is 1973, and Jim Ellis, a college-educated African-American, can't find a job. Driven by his love of competitive swimming, Jim converts an abandoned recreational pool hall in a Philadelphia slum with the help of Elston, a local janitor. But when city officials mark the new Philadelphia Department of Recreation for demolition, Jim fights back--by starting the city's first African-American swim team. Recruiting troubled teens from the streets, Jim struggles to transform a motley team of novices into capable swimmers--all in time for the upcoming state championships. But as racism, violence and an unsympathetic city official threaten to tear the team apart, Jim must do everything he can to convince his swimmers that victory, both in and out of the pool, is within their reach.

Ernest Anthony
as Bob the Barber
View All

The plot plays out as predictably as anyone might expect, but the fine details keep Pride squarely above average.

Director Sunu Gonera does a nice job with the swim meet scenes, and the cast of mostly unknown younger actors is extremely likable.

Not so much formulaic as elemental, this campy, would-be-inspirational jock weepy scrapes the barrel for life-lesson-imparting sports to exploit.

Pride is a fairly predictable entry in the highly predictable inspirational sports drama genre. But the movie is saved by the earnest, believable performance of Terrence Howard and by Bernie Mac in a more serious role than usual.

It really has nothing to be proud of but a central performance much better than the movie itself deserves. It's time for Terrence Howard to appear in a movie that rises to his level.

Terrence Howard's unforced charisma did a lot for Crash and Hustle & Flow, and he's the chief reason Pride is worth catching.

This is not a sports movie. This is a movie about a man involved in sports. This is Jim Ellis' story. This is a story of heart, conviction, motivation, determination, pride.

It's another kinda, sorta based on a true story, inspirational sports film in the vein of any given Bruckheimer sports film.

Maybe because it focused on swimming, and didn't really capture the drama of the sport, it came off like a TV movie. It even borrowed from Dead Poets Society with an 'Oh Captain, My Captain' moment.

Howard anchors the film with a charismatic turn. He doesn't turn Ellis into a plaster saint but portrays a complex and complicated man.

A movie that deserves to succeed, but falls just short because it shows us much more than it teaches us.

I really like Terrence Howard, and this movie was pretty good. Despite being super-sweet (to the point of saccharine), and being emotionally heavy-handed, I still had tears well in my eyes from time to time. While not overtly racist, this film was subtly racist. In the entire film there was only one positive white character, and he was only shown briefly at the beginning. Many of the white characters were blatantly, and ridiculously evil. BUT..I understood the meaning of the movie, and I did enjoy it.

I really liked this film alot. It's simple, very formulaic, but it is also very touching. Terrence Howard gives a very good performance. I'd recommend this film to anyone.

Swim films make good pick me up films with a very sporting motif underlying the movie pitch. Slightly let down in the fact that it was about this, haha, but still 4 stars for being good.

[size=3]"Pride" is one of those simple, conventional but uplifting movies about at-risk youth defying the odds and learning to believe in themselves.[/size] [size=3][img]http://www.getoutaz.com/story/images/photos/bklmsvkd.jpg[/img][/size] [size=3]The film is set in 1974 Philadelphia in the heart of what is often called the "inner city." [I, by the way, live in the "inner city" -- Washington Heights, NYC -- aka "the ghetto."] The neighborhood is falling down around the people who can't afford to leave. Destitution and drugs are everywhere. It's a struggle for teenagers to escape the clutches of the local drug lords, who are the only people offering well-paying jobs.[/size] [img]http://images.rottentomatoes.com/images/movie/gallery/1165269/photo_05.jpg[/img] [size=3]As usual in this genre, there's a saintly adult who teaches the kids to dream big, and as usual there's some kind of hobby in which they immerse themselves. In this case it's something that is especially counter to the inner-city lifestyle: swimming. There are few sports as white as swimming.[/size] [size=3]The role of the encouraging adult is here played by [b]Terrence Howard[/b], the man who gave "Hustle & Flow" and "Crash" such remarkable soul. Unfortunately Howard here stays on the straight and narrow. He stays tightly within the conventions of this genre.[/size] [size=3]The same goes for [b]Bernie Mac[/b], who acts against type by not cracking jokes but who also stays firmly within the conventions. I'm disappointed that first-time director [b]Sunu Gonera [/b]kept his actors in such check. This is not an auspicious directorial debut.[/size] [size=3]Along with the story of the teenagers, there is the saga of the local Recreation Center, which was allowed to fall apart just like everything else in the neighborhood. As the kids are building their swimming skills, they're also working to breathe new life into the downtown Rec Center, hoping that the city will start funding it again. I'll let you guess as to whether they succeed.[/size] [img]http://www.getoutaz.com/story/images/photos/l5gogc0r.jpg[/img] [size=3]What would have been great is more complex story-writing about the Howard and Mac characters. All we get here is that their lives were hemmed in by racism. Of course that should be part of the story, but it's just about all we learn about these men. The same goes for the boys in the story. We never really get into these boys' hearts. Lord knows that black kids aren't only faced with battles against racists and drug lords. There's a lot more going on in the ghetto than that.[/size] [size=3]But as predictable and platitudinous as the story was, I was still moved. I cried during the film a number of times. You'd have to be made of stone not to. I still enjoy seeing movies about Black and Latin kids resisting the forces that be. And it's also still important to nurture filmmaking about Black experiences, even when the output isn't stellar. Ghetto kids who see this film will be moved; there's no doubt about it. That's worth a lot more than an artistic masterpiece, at least on certain levels.[/size] [img]http://www.austinchronicle.com/binary/4896/Pride.jpg[/img]