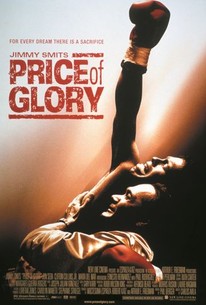 Critics Consensus: Weak script and predictable story undermines the intensity of the film.

Critics Consensus: Weak script and predictable story undermines the intensity of the film.

Critic Consensus: Weak script and predictable story undermines the intensity of the film.

Jimmy Smits returned to the big screen after a career-reviving stint on the TV series NYPD Blue with this emotional drama about the difficult relationship between a father and his sons. Smits plays Arturo Ortega, a man with lifelong dreams of being a contender in professional boxing. While Arturo had the knowledge, drive, and ambition to be a champ, his career proved short-lived, and, after a brief fling with success, he's a forgotten man. However, Arturo has instilled his passion for boxing in his three sons, who grow up learning the fine art of prizefighting. All three boys begin competing in the ring, with Arturo as their manager and coach, but Johnny (Jon Seda) quickly shows so much promise that other managers and promoters want to take over his contract and put him on the fast track to the championship. Arturo feels betrayed when Johnny wants to work with another manager, while his other two sons resent Johnny for turning his back on his father and wish Arturo had the same belief in their talents in the ring. The debut feature from director Carlos Avila and screenwriter Phil Berger, Price of Glory also features Maria Del Mar, Ron Perlman, Paul Rodriguez, and Clifton Collins Jr..

José Yenque
as The Hood

Critic Reviews for Price of Glory

Price of Glory is an earnest but flatfooted saga.

A by -the- numbers scenario that doesn't take its characters and fighters to that higher level.

Cliches fly faster than fists in Price of Glory, an old-fashioned boxing movie that can't really go the distance.

Price of Glory wins a few rounds, but, unlike The Set Up, The Hurricane or Raging Bull, it loses the fight.

The movie clocks out with a cowardly sucker-punch.

Dances a fine line between PG-13 and R.

doesn't develop any of the characters

The road to glory is often paved with good intentions, but so is the path to mediocrity, which exactly where Carlos Avila's well-meaning drama heads in no time.

...generally entertaining, in a movie-of-the-week sort of way.

While the intentions are good, Price of Glory is never confident enough to push the boundaries of the sports drama mold.

Audience Reviews for Price of Glory

Fantastic movie!! This is an absolute favorite of mine. After the pivotal peak and rise of HBO's original 'Resurrection Blvd," here is a film with similar interests and highlights of a family in boxing. The movie reflects around the Ortega family who lives near the border of Arizona. Arturo was once a young boxer who dreamt of becoming world champion, but his dreams were crushed the day when he lost a bout in a money fight. Several years later, he teaches and trains his three young sons in hopes that boxing will help secure their future financially. As they get older, they soon realize their dreams are getting bigger as well as their interests. The family embarks upon several new stages in their lives, and Arturo realizes that choices and decisions are no longer his to make but that of his sons. Great cast- Jimmy Smits, Clifton Collins, Jon Seda, Maria Del Mar, Louis Mandylor, and Sal Lopez. Great music! Definitely worth seeing.