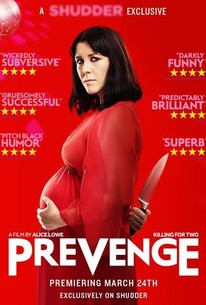 Critics Consensus: As ambitious as it is daringly transgressive, Prevenge should thrill fans of pitch-black horror-comedy -- and open untold opportunities for writer/director/star Alice Lowe.

Critics Consensus: As ambitious as it is daringly transgressive, Prevenge should thrill fans of pitch-black horror-comedy -- and open untold opportunities for writer/director/star Alice Lowe.

Critic Consensus: As ambitious as it is daringly transgressive, Prevenge should thrill fans of pitch-black horror-comedy -- and open untold opportunities for writer/director/star Alice Lowe.

A pitch black, wryly British comedy from the mind of Alice Lowe, "Prevenge" follows Ruth, a pregnant woman on a killing spree that's as funny as it is vicious. It's her misanthropic unborn baby dictating Ruth's actions, holding society responsible for the absence of a father. The child speaks to Ruth from the womb, coaching her to lure and ultimately kill her unsuspecting victims. Struggling with her conscience, loneliness, and a strange strain of prepartum madness, Ruth must ultimately choose between redemption and destruction at the moment of motherhood. "Prevenge" marks the directorial debut from Lowe, who is a triple threat, writing, directing, and acting in the film during her own pregnancy. Prevenge opens theatrically in New York and Los Angeles, and will be available nationwide on Shudder, on March 24th.

If metaphors were movies, Alice Lowe's new film would be a masterwork. Instead, it's just smart fun-as well as a promising début.

The film is a precisely crafted black-comic nightmare in a distinctive British tradition, built around a truly extraordinary performance.

A pitch-black, blood-soaked comedy and phenomenal first feature by Alice Lowe, who also stars as Ruth, the pregnant heroine.

If The Boss Baby offered the family-friendly suggestion that having a child is akin to a corporate merger, Alice Lowe's gleefully demented Prevenge makes the far less pacifying argument that carrying one is more like a hostile takeover.

A gonzo idea in search of better execution.

This movie won't be for everybody, but fans of Lowe's prior work should be thrilled to see such a distilled dose of her perverse humor.

[Alice Lowe's] first feature as a director is brilliant in a Jennifer Saunders way, mordant, skillful, outrageous, and true.

The lead character is fascinating to watch and her decision making is puzzling at times, but the film remains interesting to watch throughout and the kills themselves are interesting.

The overall thoughtfulness indicates there is a future for the multi-hyphenate artist behind the camera.

Overall, Prevenge is a witty and humorously dark feature that combines the gruesome of a stalker killer with the deadpan banter of a British comedy.

This is just pointless. Its premise is everything but valuable. It's plain offensive. [Full review in Spanish].

[Prevenge's] a singular work, from a brilliant, clever, and hugely exciting new voice in genre film.

How many people can say they wrote, directed, and starred in their own movie while they were pregnant? I believe Alice Lowe is the only person who can claim to have done so, and she did it well. Lowe who some might recognize from "Hot Fuzz", "Sightseers", and "Garth Merenghi's Dark Place" makes her feature length directorial debut with this extremely dark comedy. In it, she is directed by the voice of her unborn child to murder the people who let the father-to-be die during a fateful climbing expedition. She begins with a spirit of vigilantism, but as her murders progress she becomes increasingly sadistic by berating and critiquing the mundane lives of her victims as she slips into a misanthropic prepartum malaise. As you follow her bloody campaign, the laughs diminish and the horror starts to set in. This film has quite a lot in common with one of my favorite films so far this year: Macon Blair's "I Don't Feel at Home in this World Anymore". They both concern a female protagonist who has difficulty coping with loneliness and the callous, stupid world that pays her no mind, then there's shocking gore. They diverge however in how said protagonists deal with that problem, and in the case of "Prevenge", we are left with a decidedly more pessimistic message. It's still well worth the watch considering the great gore effects, the disturbing laughs, and a soundtrack that brings to mind "Stranger Things" and classic UK horror.