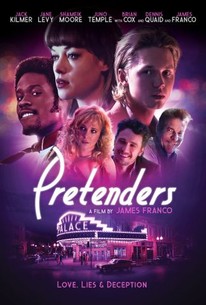 In PRETENDERS, life imitates deadly arts as a French New Wave obsessed film student, Terry, finds his muse in mysterious and beguiling actress, Catherine. Both Terry and his best friend, Phil, fall under the spell of this beautiful woman. But they soon realize that the more time they spend with her, the more enigmatic she becomes. After years of sex, betrayal, and collateral damage, the three end up in a dangerous situation that leaves one of them fighting for his life.

It descends into several discrete modes of misogyny.

Flat-footed performances, a shoddy script, sloppy filmmaking and faux-clever homages to directors like Godard, Truffaut and Bertolucci that will probably only entice viewers in, well, the first year of film school, should they happen to see it.

It's skillful enough to tickle the mind and the emotions but not effective enough to fully engage them.

... as shallow as its characters, who aren't worthy of our emotional investment.

James Franco's love triangle is clearly enamored of film history and the French New Wave, and that enthusiasm helps somewhat, but the characters never really come to life or connect with one another.

Quantity over quality seems to be Franco's motto. He's quite consistent in how inconsistent he is.

The whole production feels masturbatory instead of observant.

There are no featured reviews for Pretenders at this time.