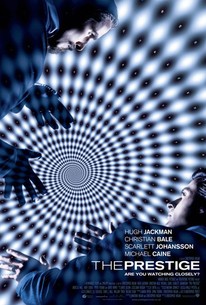 Critics Consensus: Full of twists and turns, The Prestige is a dazzling period piece that never stops challenging the audience.

Critics Consensus: Full of twists and turns, The Prestige is a dazzling period piece that never stops challenging the audience.

Critic Consensus: Full of twists and turns, The Prestige is a dazzling period piece that never stops challenging the audience.

In 1878, two young stage magicians clash in a darkened salon during the course of a fraudulent seance. From this moment on, their lives become webs of deceit and exposure, secrets and revelations, as they feud to outwit and destroy one another. Their rivalry takes them both to the peak of their careers, but with terrible consequences.

John B. Crye
as Voice

Russ Fega
as Man in Hotel No. 1

Kevin Will
as Man in Hotel No. 2

James Otis
as Blind Stagehand No. 1

Sam Menning
as Blind Stagehand No. 2

Brian Tahash
as Blind Stagehand No. 3

Enn Reitel
as Workman No. 1

Chris Cleveland
as Will
View All

News & Interviews for The Prestige

Rank All of Christopher Nolan’s Movies
Queen of Katwe, The Secret Life of Pets, and More on Netflix and Amazon Prime This Week
Hugh Jackman’s 10 Best Movies

View All The Prestige News

Critic Reviews for The Prestige

The film is never less than engaging, though considering that the title The Prestige refers to the moment in a magic act that gives it its "wow" factor, it's kind of a shame that the ultimate "reveal" in the movie is a little too tricky for its own good.

It's quite a movie -- atmospheric, obsessive, almost satanic.

The who's-bilking-whom mind games make for compelling fun, but once the presto moment of The Prestige is revealed, you're left with nothing but shattered illusions.

It's a very cool piece of filmmaking -- as it has to be, given the intellectual sleight-of-hand that lies at its heart. Yet it succeeds as both great entertainment and an absorbing rumination on the dangers of playing God.

The Prestige is a superb puzzle-box thriller.

The Prestige does require a slight leap of faith, but the journey is so entertaining, it is a leap well worth taking.

When you discover the secret to a magic trick, all you want is to re-watch it and see if you can spot the illusion, so too does The Prestige demand repeat viewings.

Nolan's most perfect commentary on his favourite auteur theme of mise en abyme, as both magicians in their own ways make near Faustian pacts for their climactic 'prestige'.

Although the film's stunning reveals make the audience realise it has been duped... there is a protagonist to empathise with each time.

While you're looking here, it's executing a trick there, and the film is, in fact, structured like a magic act with three parts called the Pledge, the Turn and the Prestige.

Yes, the film is built on deceptions, and yes, it features a series of interconnected twists, but like all good movies and magic tricks, it doesn't lose any glory in a repeated performance or viewing, only gains it.

Audience Reviews for The Prestige

A cool film with a few good twists along the way.

Having delivered such strong films as Memento, Inception and Interstellar (outwith the hugely successful Dark Knight trilogy), it's safe to say that director Christopher Nolan's output is of a very high standard. Many may even claim that he's yet to make a bad film and that his filmography is nothing but quality. For me, though, The Prestige is an exception to that and a major blip in an otherwise solid résumé. At the turn of the 19th century, celebrated stage magician Alfred Borden (Christian Bale) is accused of the murder of Julia McCullough, the wife of his partner Rupert Angier (Hugh Jackman). Her death happened during a magic trick but Angier puts the blame solely on Borden. As a result, the pair become rivals and a bitter feud takes place between them as they try to sabotage each others tricks with dangerous consequences. As the film opens, we are informed that every magic trick consists of three parts or acts. The first part is called "The Pledge" where the magician shows you something ordinary. The second act is called "The Turn" where the magician takes the ordinary something and makes it do something extraordinary (like disappear). But making something disappear isn't enough; you have to bring it back. That's why every magic trick has a third act, the hardest part, the part that's called "The Prestige". And so the stage is set for Nolan's stylish and elaborate sleight of hand. He adheres to this magicians three act rule in the films structure but it's the hardest act (and the one that shares the film's title) that actually undoes the whole affair. In saying this, it would suggest the film is let down solely by it's reveal. It's not. From the outset the film is very slow and tedium sets in very early. I don't have a problem with slow builds and I'm actually very fond of a good magic trick. Nolan's premise is very enticing and having two warring magicians play against each other should make for gripping entertainment. Only it doesn't. It's a laborious and excruciatingly dull endeavour which is very surprising considering it has Nolan in charge. With films of this kind, you know there will be an attempt to pull the rug from under your feet. That's a given and given Nolan's track record of being more than able to deliver a good twist you expect that you're in safe hands. However, it reaches a point where it's just one preposterous plot twist after another with the ultimate misgiving being that Nolan doesn't capture a sense of wonder. It's difficult to accept the plot developments when you know that it's all just elaborately staged for the sake of it. It's like trying to convince the viewer that CGI is actually real. There's no way your going buy it and this film is as similarly unacceptable as that preposterous proposal. As for the final reveal, when it actually happens, it just stinks. It's a ludicrous revelation that's so tenuous that it's practically impossible to work it out and left me with feelings of frustration. Maybe this was Nolan's intentions all along but, to me, it felt like a con. Granted, Nolan has a good eye for the period and his regular cinematographer Wally Pfister does some beautiful work in capturing the Victorian era amidst Nathan Crowley's impressive production design. To the eye, it certainly looks the part but really the appearance is all smoke and mirrors. There's really no consistency underneath it all. Even having the charismatic leads in Bale and Jackman should work in it's favour but the film never really knows who to fully focus on at any given time leaving the development of their relationship - and their own identities - a bit of a muddle. It's hard to know which one to root for as their character arcs are continually blurred and messily delivered. From what I can gather, I'm in the minority with this one. Many critics and viewers have lavished nothing but praise on it but I fail to see what the attraction is. As I've said, the three act structure is undoubtedly on show; we are offered the "pledge" and it delivers the "turn" but Nolan's reveal simply doesn't work, leaving the final product lacking the "prestige". Which doesn't say very much for a film that can't even live up to its own title. Mark Walker

six or seven dollars worth of movie