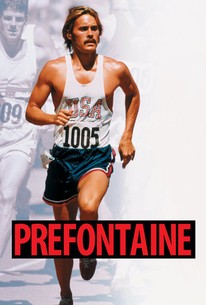 In the early 1970s Steve Prefontaine broke every American track record for 2,000-10,000 meter racing. When he went to the 1972 Olympics in Munich he did not win a medal, but he did go on to fight for athletes' rights up until his tragic death in 1974.

George Catalano
as Patron No. 1

Jim Freeman
as Patron No. 2

Steve Kelley
as U of O Reporter

Stephen J. Lang
as Bar Back

Wendy Ray
as Himself

Paul Yarnold
as Reporter at Trailer Park
View All

Prefontaine gets to the finish line in reasonable shape despite plenty of sloppy running along the way.

Though it is always pleasant and agreeable, this film has the bland and undemanding texture that characterizes movies made for network TV.

James tries too hard to bring closure to Pre's life, and, as a result, strays a little too far into melodrama. The tearful reminiscences at the end, not to mention some of the stuff at the funeral, lay it on thickly.

Here is a sports movie in the tradition of the best sportswriting, where athletes are portrayed warts and all. You do not have to be nice to win races, but you have to be good.

The Super-16mm film stock gives the film a grainy look that blends in artfully with the vintage videotape of ABC's '72 Olympics coverage.

Steve Prefontaine must have been something special -- everyone says so -- but there's no magic on the screen.

A touching, poignant movie with a great performance by Leto

With its moving final scenes and well-developed subject, the story of Steve Prefontaine is a decidedly well-told American tale.

One of the better sports movies to come from Hollywood in recent years.

Nothing more than a glorified, profanity-sprinkled made-for-TV movie, from the cast right down to the shallow treatment of its subject.

Now Steve Prefontaine can be immortalized for the complex and shining star that he was.

Some have criticized "Prefontaine" as too bland, colorless, akin to a tv movie. Those people probably hated Rocky, The Karate Kid, and The Natural too. No, this is a well-made film, inspirational, and also received two thumbs up from Siskel and Ebert. Much of the story is told as flashbacks by the people in his life, long after his death--mother, father, girlfriends, and coaches. As opposed to the Warner Brothers bio of Steve Prefontaine "Without Limits," this film makes more use of other people in "Pre's" life, especially his parents and his high-school girlfriend. No one could fault either actors' performance as the iconic "Pre." Both actors bear an uncanny resemblance to the real man, even his upright running style. Analyzing the Olympic scenes of both the real guy and the actor, its hard to distinguish the two. Prefontaine spends more time on the Olympic hostage crisis, a good lesson for those who may have forgotten or never knew what happened there. One amusing difference between the two films is the explanation for how Pre hurt his foot (requiring stiches) on the eve of his first NCAA championship meet. In "Without Limits" it resulted from some acrobatic sex with a local girl, while it was a foolish swimming stunt in "Prefontaine." Any critic must recognize "Prefontaine" as an example of the great work Jared Leto has created since this film. His version of Pre is more combative, determined than Billy Crudup's. He's not trying to win any popularity contests, although both films stress Pre's confrontational attitude with those governing amateur American athletics at the time. The film is about fighting the establishment and hypocrisy but even more about single-minded determination and not allowing any limitation to stand in the way of achievement. Lesson for life both films drive home: While winning is important, giving every things you have every second is more important. Pre was quoted prior to competing in the 5,000 meter race at the the Munich Olympics: "if it's a guts race, I'm the only one that can win." I hope the folks at The University of Oregon appreciate this film; it's a testanment to the greatness not only of Pre but also Bill Bowerman, and the whole track program. I know it sold me as the preeminent track school, the gateway to Olympic gold. It is hard to imagine such a monumental cultural impact on sport and culture coming from a track athlete, but it really happened-Nike co-founder Phil Knight compared him to Muhammed Ali, and the obvious comparison is to actor James Dean. I highly recommend this film to track and field fans and also movie-lovers who cherish true-life inspirational stories.

Sports films are boring and if "Chariots of Fire" taught us anything, that rule applies even to films where we get a close view of people running. Wow, when you say it, that actually does sound boring, but not in your head and, well, not here. Man, Jared Leto and his charisma cracked the code and made an entertaining sports film. Of course, what can you expect from a rocker? Oh wait, he's contemporary. Sorry Jared, but no matter how much you yell about kings and queens, if you're not playing Freddie Mercury, I'm not interested, but mostly because you've got to get back into films, because no matter what Edward Norton says, that beautiful thing of yours called acting is far from destroyed... I said only having just seen film he did almost "fifteen" ago. Still, when his career was first blooming, ... Jared Leto was already in movies no one had heard about, which isn't to say that he wasn't good in them, because he really was, and although he carries this film, he doesn't entirely carry it away from its flaws. As I said earlier, the film isn't particularly boring, like most sports films, but I never said that it wasn't captivating. It's not that the subject isn't fascinating, which it is, but the themes they use in the film, while rather inventive in the biopic genre, aren't handled very well. The film features segments where they show a montage of interviews with Prefontaine's loved ones. It's not quite like "Confessions of a Dangerous Mind", for instead of incorporating that theme in every now and then, this film overdoes that for a long time, making the film feel so much like a documentary and stripping of it of its intimate tone, leaving to feel hollow and unengaging. However, those segments come and go, but when they do finally go, there's such a dent left by the documentary theme and the transitions between the themes are barely palpable, making it hard to get back into the film. Still, getting back into the film would be a much more demanding task were it not for, of course... the great soundtrack. Oh yeah, and let's not forget the acting. Ed O'Neill and R. Lee Ermey are playing... well, Ed O'Neill and R. Lee Ermey. Still, the two are as charismatic as a coach can get and they work wonders off of Jared Leto, establishing a chemistry that's not terribly explored, yet strong enough for you to enjoy their time together. Still, no matter what, if it's a scene with Jared Leto, it's enjoyable. Okay, now, as much as I've been praising him, he's not terribly stellar, but only because he's not written to be. Still, what he is given to do he milk's for all it's worth with his charisma, emoting and captivatingly striking authenticity as Steve Prefontaine. Still, he's not simply tranforming into Prefontaine. Prefontaine, himself, went through some changes, and Leto's impressively careful, but effective execution of every layer and characteristic in Prefontaine really does top off his transformation and makes him quite a strong enough lead to carry this film from its beginning to its solid ending. At the end of the race, its messily-handled storytelling techniques put a dent in the engagement value, but with a strong story, carried by an excellent Jared Leto and his chemistry with the charming cast, "Prefontaine" ultimately stands as an entertaining and satisfying study on the rise of the late, great legend of the track. 3/5 - Good

While there seem to be many different opinions on weather or not the facts in the film are accurate, the fact remains that this was a fantastic movie that perfectly illustrated the drive and determination that made pre a national icon. Jared Leto is amazing as well. Based on his other work, to be honest, I didn't think he had it in him, but he really surprised me and does an excellent job with the role. It's inspirational and a great tribute to a great man. I would definatly suggest seeing it!.