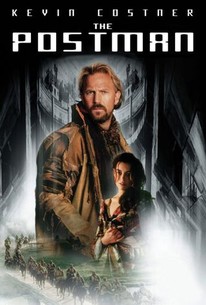 Critics Consensus: A massive miscalculation in self-mythologizing by director and star Kevin Costner, The Postman would make for a goofy good time if it weren't so fatally self-serious.

Critics Consensus: A massive miscalculation in self-mythologizing by director and star Kevin Costner, The Postman would make for a goofy good time if it weren't so fatally self-serious.

Critic Consensus: A massive miscalculation in self-mythologizing by director and star Kevin Costner, The Postman would make for a goofy good time if it weren't so fatally self-serious.

Kevin Costner directed and stars in this adaptation of David Brin's science fiction novel The Postman (1985), first published in 1982 issues of Isaac Asimov's Science Fiction Magazine. Costner's return to directing after his Oscar-winning Dances With Wolves(1990) is a futuristic epic depicting the aftermath of a destructive war. Some 16 years from the present day, America has been turned into a wasteland of separated communities minus a national government. A vagabond (Costner) who travels through these little villages performing Shakespeare is captured by marauders known as the Holnists, and thrown into a totalitarian labor camp run by a Hitler-like dictator, General Bethlehem (Will Patton). Making an escape, the drifter, known to some as "Shakespeare," stumbles across an abandoned U.S. Postal Service jeep and dons the dead postal-worker's uniform. With a scheme simply to get food, he sets out to deliver 15-year-old mail, proclaiming himself The Postman, and discovers that residents accept his lies about a restored United States government because they desperately need something to believe in. This hope leads to the thought that perhaps the United States of America could indeed be restored, so an unusually inspired young man, Ford (Laren Tate) is deputized with the "Neither snow, nor rain..." oath to become the country's second Postman. At the town of Pineview, the attractive Abby (Olivia Williams), who has an impotent husband, asks The Postman to impregnate her. After Abby's husband is killed during a raid by Bethlehem, she is taken prisoner but injures Bethlehem and makes an escape. Pregnant, she spends the winter nursing the wounded Postman in a snowbound cabin. When spring comes, they emerge to discover that Ford has organized an entire squad of mail deliverers who regard The Postman as a mythical hero. The Postman reluctantly accepts his messianic role in the rebirth of the country, even as it becomes clear that the rebel force must ultimately battle and defeat the Holnist army in order to regain the American Dream. ~ Bhob Stewart, Rovi

Kevin Costner
as The Postman

Will Patton
as Bethlehem

Giovanni Ribisi
as Bandit No. 20

Critic Reviews for The Postman

It's about as inspiring as a movie about a vengeful meter reader.

Star/director Kevin Costner's futuristic folly The Postman is so loopy that, for a while, one wants to shield it from a critical storm that has already begun.

There are those who will no doubt call The Postman the worst film of the year, but it's too good-hearted for that.

Costner the director lavishes all sorts of attention on Costner the actor, from laughably reverential dialogue ("You give out hope like it was candy in your pocket") to loving close-ups to gauzy slow-motion montages.

You can go with the idea of a heroic postie implausibly rallying the downtrodden, or you can have fun making fun of its awfulness.

...wasn't bad for the first two hours, but then kept going another hour

The first half of Costner's The Postman is actually quite interesting, but it falters badly in the second half with a few unintentional howlers.

Not as bad as everyone says, but still not worth seeing.

Die-hard Kevin Costner fans may find themselves changing their mind after seeing this overlong, lumbering mess, a miserable failure in just about every respect.

Audience Reviews for The Postman

Costner plays with an unlikely concept: that the little threads that form society are among the most resonant , like a thing as easily dismissable as the delivery of the mail being the hope in an apocalyptic aftermath. Sometimes corny, yes, but a point well taken.

Considering all the flack that The Postman has received, I'm surprised that I enjoyed the film, and that it is actually pretty good. The film is certainly better than what the mainstream critics have said about the film, and I think that this film is quite frankly underrated. The film is pretty entertaining, and has a pretty good cast to support the film. Kevin Costner tends to direct biog, sweeping epic style films, and though this isn't exactly Dances With Wolves, the story is quite grand. What surprised me about The Postman was Will Patton's performance, he was really intense on-screen, and he plays a great villain in any film he does. Patton lights up the screen, and he is a terrific antagonist. The Postman is a very good, underrated film that Costner fans should check out. The Postman is quite frankly underrated and it's a better film than what most critics have said. This film has a good story, despite the fact that it's not perfect, the film is entertaining and has a good cast to boot. The Postman is well constructed post-apocalyptic action drama that doesn't deserve the flack it has received. I agree that the film could have been much better, but for what it is, The Postman is good entertainment. Kevin Costner directs an entertaining film that is far better than what most people have said it would be. Watch this film with an open mind, and you be the judge. I enjoyed it, it's not perfect, but it definitely isn't awful.

Sometimes I feel kind of sorry for Kevin Costner. Two out of two post-apocalyptic movies he's made, that both flopped and were torn a new one by the critics. One being Waterworld, which I personally find highly underrated, and the other being this, which altough not as good, has also become the victim of an undeserved degree of heckling. I may concur on it being cheesy and weak in its writing, but in a grander perspective, it's actually not that bad. It was worth the view at least, even if it's a little too lengthy for its own good.

I had to bump this one up a little after giving it another watch. It's an excellent movie with a great cast that pulls off every role. Costner plays the Postman perfectly and it's awesome to see this character act like a real man with flaws. He isn't the white knight who rides into town and saves everyone without any worries in the world. He is a conflicted man who finds himself over his head very fast and stands up to that challenge when given no other choice. The production value on the flick is great as we travel through a world that has suffered war and disease. It's a long one... three hours... but the story is well crafted and every part feels important. Will Patton plays a great villain in the movie and, for me, is one of the great baddies in cinema.