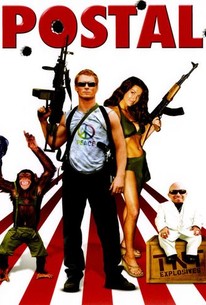 Critics Consensus: An attempt at political satire that lacks any wit or relevance, Postal is nonetheless one of Uwe Boll's more successful films -- for what it's worth.

Critics Consensus: An attempt at political satire that lacks any wit or relevance, Postal is nonetheless one of Uwe Boll's more successful films -- for what it's worth.

Critic Consensus: An attempt at political satire that lacks any wit or relevance, Postal is nonetheless one of Uwe Boll's more successful films -- for what it's worth.

Notorious, critic-boxing director Uwe Boll takes the helm for this adaptation of the controversial video game that ignited controversy across the globe and is actually illegal to own in Australia and New Zealand. Dude (Zack Ward) is an unemployed slacker currently subsisting on Social Security until he lands his next job. Dude's uncle Dave (Dave Foley) is a cult leader currently in dire financial straits. When Uncle Dave hatches a plan to rip off a local amusement park, Dude sees the heist as the perfect opportunity to make a little extra cash. Unfortunately for Dude and Uncle Dave, the Taliban are all set to execute the exact same heist. Erick Avari, Seymour Cassel, Verne Troyer, Larry Thomas, and J.K. Simmons star in a deliberately over-the-top action comedy that is sure to garner as much controversy as the video game that inspired it.

Verne Troyer
as Himself

Uwe Boll
as Himself

Vince Desiderio
as Himself

William Veroni
as Baby in Carriage

Christine Lippa
as TV Host No.1

Mark Brandon
as TV Host No.2

Myfanwy Meilen
as TV Host No.3

Mike Dopud
as Security Guard No.1

Ed Anders
as Security Guard No.2

David Adams
as IRS Agent No.1

Robert Clarke
as IRS Agent No.2

Rick Faraci
as Plane Passenger No.1

With Postal, Boll clearly set out to make history's most offensive, hateful movie. As is his custom, he failed spectacularly.

Postal goes from offensive 9/11 comedy (window washers on the WTC) to trailer-park crudity and back with no rhyme or reason.

Convinced that Arab terrorists are inherently hilarious, and that shooting fish in the leaky barrel of American pop culture takes marksmanship, Boll is a boor, and a symptom of something sad and dehumanizing.

If this movie had been made by an unknown young director, a lot of critics would still be panning the movie for its inconsistencies -- but many others would be praising his courage.

Postal strikes me as marginally superior to Morgan Spurlock's merely boneheaded Where in the World Is Osama bin Laden? But that's like saying Moe is smarter than Curly.

It's hard to imagine a worse movie will come out this year, and yet Boll's growing notoriety has already earned the trailer millions of hits on YouTube. Ed Wood never had it so good.

The German Mr. Boll and the Canadian Mr. Knight seem to want to comment on American culture, but their bystander perspectives clearly do nothing to inform them how to maximize their material.

A bad movie based on a lousy video game. It barely works as a satire, and as a comedy only managed to extract a couple of laughs out of me. [Full review in Spanish]

Although the best parts of Postal seem driven by a committed cast and a fearless sense of juvenile experimentation, there's little here that's consistently funny or original.

The end result is a film that feels as though it's been conceived and executed by a third grader...

Most of the outrageousness is outrageous for the sake of being so outrageous.

Boll mistakes shock for satire and crudity for cleverness in this desperately unfunny, hopelessly clueless catalogue of the ills of America... that ends up rejoicing in what it believes it is sending up.

I can imagine this is a highly controversial film in the US haha its laden with very dark black humour and is possibly more filled with satire than Robocop, at least satire thats strong for this time. Black comedy is an understatement, this is down right pitch and pretty strange too. Much like a real computer game or the actual game (which I have never played by the way) there isn't really any story for this film, just a couple of guys who need to steal a ton of cuddly dolls to make money, one to escape his shit hometown the other to pay of a huge tax bill. At the same time the Taliban wants the dolls too, and of course to blow up the western world. Its very weird and doesn't make any sense really, its just a long gun battle with many many deaths and typical cliched characters, but that doesn't mean this is a bad film. The little sequences where Bin Laden chats with Bush are actually very good and quite genius :) Boll has strong opinions here ;) much like a Michael Moore film there are so many references like this strewn throughout and the ending pretty much sums up the whole feel of the film and the real world to a degree...scary :( Whats more scary is the beginning of the film with a quite close to the bone sequence of an airliner being flown into a skyscraper hmmm :( The cast are all unknown virtually and do an OK job, the main lead Ward is actually pretty good as a everyday guy who slowly becomes a gun totting 'Mad Max' style vigilante. There are plenty of sexy girls, Boll makes a cameo defending his films as himself, but ends up getting shot in the nuts haha numerous bizarre deaths with little or no consequences, and that includes babies and kids getting blown away or run over, cops with no morales etc...its just your everyday GTA style computer game on the big screen. In that aspect Boll has made a very good film which could be the closest thing to a perfect computer game adaptation, its close to source material, its clearly made for the right age group and hasn't been watered down and it does actually look like a free roaming GTA style game. The fact that it doesn't really make any sense and has no meaning doesn't really matter...its a film based on a violent computer game which has no real point to it accept to run around and kill people. Depends how you look at it. Very clever in places with strong yet clearly comicbook/computer game style violence and probably Bolls finest hour so far.

Postal is a better film by director Uwe Boll. Postal is based on the controversial video game of the same name, and the film is politically incorrect. The film is pretty funny and does a good job at entertaining. Uwe Boll manages to direct a competent film, and it's not dreadful like Alone In The Dark, Bloodrayne, House Of The Dead and In The Name Of The King. A decent enough comedy with politically incorrect laughs to be had, Postal is a live action version of South Park.

Congratulations Toilet Boll! Postal absolutely sucks! This is a shocker. Oh wait, no it isn't.

This film may only be loosely based on the video game by the same name, but this monstrosity is so crappy that it still gives the game a bad name. This movie is not funny, not entertaining, and much too long. Seriously, the 1 hour 40 minutes feels like an eternity.

The movie is supposed to be wacky and over the top, but this film still goes nowhere. Boll's attempt at humor is executed poorly in a story with plot holes, which shouldn't matter, but they do anyway. Boll just continues to find ways to disappoint.

Zack Ward is unimpressive, Dave Foley has full frontal nudity, and J.K. Simmons lowers his reputation just by taking a role in this abomination. At least there are a handful of scantily clad women to look at. Their acting, on the other hand, is also "scantily clad." To top it all off, Toilet Boll actually appears as himself. As if this movie isn't bad enough, but now his face appears on the screen and his voice is heard.

Postal is a picture that fails at every turn. Avoid it at all costs and move on.

On one hand Uwe Boll continues to make crap. On another hand this movie was so bad I laughed at times just for the sheer stupidity.