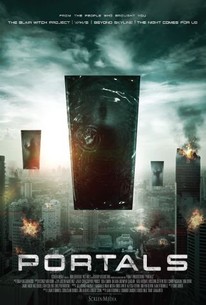 On August 5th 2020, an undisclosed research facility successfully creates the world's first active black hole...Shortly after a cosmic disruption occurs triggering a series of world-wide blackouts; after which millions of mysterious, reality-altering, Portal-like anomalies appear everywhere and anywhere across the planet. While many flee from the sentient objects, the real terror sets in as people are drawn toward and into them. Portals is a genre-bending anthology featuring three internationally connected stories told from four visionary filmmakers perspective as the cosmic events unfold within the first few days. The action quickly kicks off with our wrap around story following Adam and his family on their way to his mother-in-law's house during the blackouts and reports of missing persons..during the road trip their SUV barrels directly into an Anomaly that suddenly appears in the middle of a desolate road. He later wakes up in a mysterious hospital suffering from optic nerve damage and is given an experimental eye transplant that links itself directly to the anomalies. With a determination to be reunited with his family; Adam soon discovers the hospital has cosmic secrets of its own.

While the concept suggests mind-bending alternate-reality stuff, the not terribly cerebral reality of the movie offers more in the line of eyeball-gouging, blood-spurting, face-melting shock horror.

Ultimately, the unusual structure seems like a cover for how underdeveloped this film's various segments are.

Not a dimension to which you'll want to cross over.

It is difficult to believe that an actual first encounter with interdimensional beings would be such a complete waste of time.

There's no extra meaning here, and if there is, it's really not worth pursuing. I was done with it when it was done...

Despite an intriguing premise, this film goes absolutely nowhere, opting for random gore as opposed to containing any real ideas.

The cohesion and payoff I was awaiting wasn't coming. Sigh.

Portals ensures connective tissue unites worldwide events within each localized story, but loses the inherent variety of anthology freedoms in doing so.

A sci-fi/horror anthology that tries to tighten the format, but still suffers the usual pace, flow and suspense problems of film anthologies.

There's no character progression, nothing is explained, yet the audience is assaulted with a ton of pointless exposition, wooden acting, and a hilarious ending that's supposed to be tantalizingly ambiguous but instead reeks of desperation.

A poorly structured, forgettable horror anthology that leaves a lot to be desired.

There are no featured reviews for Portals at this time.