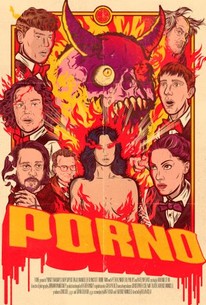 Four repressed, religious teens and a straight-edge projectionist working at a small-town movie theater in the 1990s discover a secret screening room filled with vintage X-rated exploitation films. Playing one of the old film reels unleashes a succubus named Lilith (Katelyn Pearce), who attempts to seduce each of them in order to steal their souls. Directed by Keola Racela. Jillian Mueller, Glenn Stott, Evan Daves, Larry Saperstein and Robbie Tann co-star.

For a film unafraid of occasional full frontal nudity, this is surprisingly puritanical, especially when you consider the plot.

This gory teen comedy blends laughably outrageous carnage with a legitimately scary plot to delightful ends. Throw in a winking fetish for cinephile culture and audiences are sure to go wild for the gutsy film.

If you lament the lack of graphic genital torture, exploded testicles, and sex demons in modern horror cinema, you're in luck.

If this debut is anything to go on, then it'll be fascinating to see what Racela does next.

The film is unpretentious and a bit unwieldy at times, but is a fun goretastic romp that felt like a mash-up of Mary Jane's Not a Virgin Anymore and Demons if it was directed by a young Lloyd Kaufman.

It's light, fun fare, with a little something for everyone, just so long as no one minds watching a sex demon vomit black blood into the face of a peeping Tom for a very, very long time.