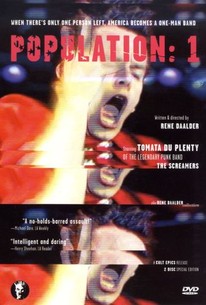 With Tomata DuPlenty and Sheela Edwards playing themselves, the storyline of this rock/punk/jazz-filled ghetto blaster of a movie exists in the imagination of DuPlenty, who sees himself as the sole survivor of a nuclear holocaust. His mind's eye then traces the history of civilization (different from Kenneth Clark's version) back through World War II and beyond, concluding with a long-ago nuclear holocaust that cleared the planet of life. DuPlenty was a founding member of the influential San Francisco syntheziser-punk ensemble The Screamers; since the group never released a record, this is one of the few places one can hear (and see) what DuPlenty's performance style was like.

Critic Reviews for Population: One

There are no critic reviews yet for Population: One. Keep checking Rotten Tomatoes for updates!

Audience Reviews for Population: One

There are no featured audience reviews yet. Click the link below to see what others say about Population: One!