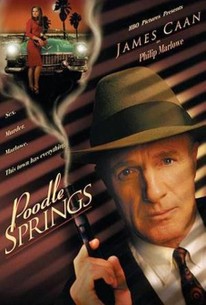 For this TV movie, Bob Rafelson directed James Caan as famous shamus Philip Marlowe. The novel Raymond Chandler (1888-1959) was writing during the year of his death remained unfinished until it was completed 30 years later by Spenser author Robert Parker. The British-based, Czech-born screenwriter/playwright Tom Stoppard scripted this telefilm adaptation. In 1963, the middle-aged Marlowe has put on a few pounds and gained a new wife, wealthy heiress Laura (Dina Meyer). In Poodle Springs, California, on the Nevada border, the couple lives in a house given them by P.J. Parker (Joe Don Baker), Laura's father. Framed for murder, Marlowe is bailed out by Laura, and he's soon hired to locate a gambler who owes $100,000. Investigating lowlife photographer Larry Victor (David Keith), Marlowe learns of a blackmail plot involving stripper Lola (La Joy Farr); he follows a trail that leads to a land scheme, while corpses begin to litter the landscape. This was James Caan's first TV role since Brian's Song (1971, later released theatrically), and the whodunit premiered July 25, 1998 on HBO.

There are no critic reviews yet for Poodle Springs. Keep checking Rotten Tomatoes for updates!