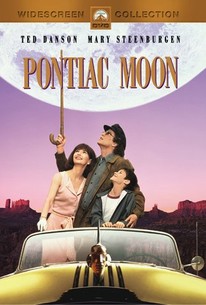 A dysfunctional family reunites during the Apollo XI moon landing in this drama starring real-life couple Ted Danson and Mary Steenburgen. In 1969, eccentric teacher Washington Bellamy (Danson) turns the arrival of men on the moon into a science project for his son Andy (Ryan Todd). They drive across the country to Idaho's Spires of the Moon National Park, where the odometer of Washington's classic Pontiac Chief will read 238,857, the exact mileage traveled by Apollo XI. Left behind is wife and mother Katherine (Steenburgen), an agoraphobic who never recovered emotionally from a miscarriage seven years earlier. On the road, Washington and Andy encounter a Native American soldier (Eric Schweig), a flirty barfly (Cathy Moriarty) and Washington's long-lost brother (Max Gail). Back home, Katherine nervously ventures outside to follow her family. When Washington's car breaks down, he steals a new engine, bringing the authorities after him and leading to a rendezvous at the park between father, son, mother, and cops, as the astronauts simultaneously land on the moon. Pontiac Moon (1994) was a critical lemon for director Peter Medak, who enjoyed more success with his British crime dramas such as The Krays (1990) and Let Him Have It (1991).

Gene Borkan
as Trucker with Cigarettes

Arthur Senzy
as Mechanic
View All

There are no critic reviews yet for Pontiac Moon. Keep checking Rotten Tomatoes for updates!

There are no featured audience reviews yet. Click the link below to see what others say about Pontiac Moon!