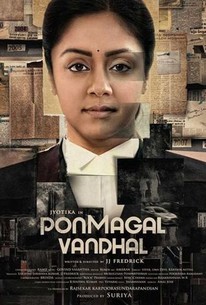 In 2004, a number of little girls were kidnapped and murdered in the Nilgiris district, causing mass hysteria. Somehow, the blame was pinned on a North Indian woman named Jyothi, who was then killed in a police shootout. Fifteen years later, Petition Pethuraj (K. Bhagyaraj) fights to have the case reopened. He asks his daughter Venba (Jyotika), a rookie lawyer, to take it on despite it being solved in the eyes of the townspeople. Venba agrees and fights in court despite the hostility she receives from the locals. Soon enough, she discovers the truth. Directed by J.J. Fredrick.

These things, though, are constantly at war with a screenplay (also by Fredrick) that can't help but succumb to its worst impulses, abandoning a focus on a heinous criminal case to instead get too twisty and turn-y for its own good.

Ponmagal Vandhal is an unapologetic message movie in the guise of a courtroom drama and banks solely on the crusader zeal of its lead star to help it get a favourable verdict from the audiences.

M Suganth
The Times of India

Jyotika carries the film with her performance, but you wish she varied the mix of pain-sorrow-determination: after a point it becomes one-note.

There are no featured reviews for Ponmagal Vandhal at this time.