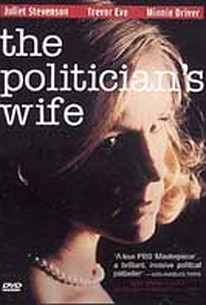 A hypocritical politician touting family values faces the wrath of his vengeful wife when it's revealed that he has been carrying on a torrid extramarital affair in British filmmaker Graham Theakston's award-winning PBS drama. Tory powerhouse and family-value proponent Duncan Matlock (Trevor Eve) is on the political fast track until the tabloids catch him in a compromising position with a young escort. As the media locks on to the sordid controversy and Duncan's loyal wife Flora's (Juliet Stevenson) cool façade begins to melt down, the revelation of telephone tapes disclosing the true extent of the affair leaves her reeling. Now determined to strike back at her philandering husband and seek revenge by any means necessary, Duncan's only ally is about to become his worst enemy. ~ Jason Buchanan, Rovi

There are no critic reviews yet for Politician's Wife. Keep checking Rotten Tomatoes for updates!

"Never underestimate the power of a woman scorned." In a nutshell, that's the tagline for this made-for-TV miniseries from the United Kingdom. Well done. Good actors, and a fine script. I really enjoyed watching this wife get back at her rotten husband..slowly, methodically, and with a lot of thought put into it. Good job...