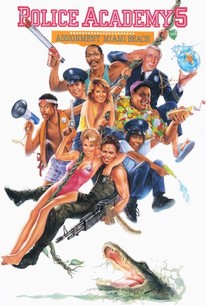 America's most inept law enforcement team mixes business with pleasure as they head to sunny Florida in this comedy. The aging and often-confused head of the Police Academy, Commandant Lassard (George Gaynes), has reached mandatory retirement age, much to the pleasure of the devious Capt. Harris (G.W. Bailey), who is still scheming to take over his job. Lassard, Harris, and a handful of the Academy's "distinguished" graduates (including Bubba Smith, Michael Winslow, Leslie Easterbrook, and Marion Ramsey) travel to Miami Beach for a special ceremony to commemorate Lassard's years of service as he leaves the force; however, a luggage mix-up puts the clumsy cops in the middle of a massive illegal arms deal. Police Academy 5: Assignment Miami Beach was the first film in the long-running series that did not star Steve Guttenberg (Bob Goldthwait also left the franchise at this point), but most of the other regulars bravely soldiered on without him.

James Hampton
as Mayor of Miami

Arthur Edwards
as Thief in Drag

Via Van Ness
as Stewardess #2
View All

Miami field trip only brings a pastel backdrop to the insipid infighting of the boobs in blue.

It's business as usual: fart jokes.

The real culprit is producer Paul Maslansky, the creator of the Academy films, clearly a man who can never be stopped, not even by a SWAT team of movie critics with blood in their eyes.

It's exactly what you would expect it to be.

Fifth times a charm? well actually this film does get back on track somewhat after the terrible fourth. The first Academy film without Guttenberg as the wet ass Mahoney, so we get another Mahoney-esque character in Nick Lassard...cos they need that all round good looking good guy who pesters/stalks the sexy women in these films. The plot is quite straight forward as usual, Cmdt Lassard is up for retirement (after Harris brought it to everyone's attention) and is being given a heroes send off in Miami. So off he goes with his regular band of loyal officers. Everything gets spoilt though when an accidental bag switch with some criminals equals Lassard having some stolen jewels and the criminals getting his pet goldfish. While this still continues the trend of a PG film there is still a reasonable amount of fun to be had with the highjinx. The plot being set in Miami of course equals lots of obligatory tanned ladies in bikini's and cliched poolside slapstick. While its not dirty or seedy its relatively easy going and watchable which is surprisingly really. I think this film is much closer to a Pink Panther type film with the trio of incompetent criminals trying to nab Lassard's bag, that combined with the standard predictable pranks on Harris. Once again though we have the repetitive training aspect of these films...yes again. Because the guys are at a convention for Lassard's award there is yet more police procedural demonstrations which once again gives all the characters the chance to demonstrate their quirky skills. Tackleberry and his guns, voice commands with Hooks....do I really need to go through this again? The only new addition to the team this time is Thacker as Conklin from the previous film, as you may have already guessed his huge weight comes into effect for some visual gags. This time around its actually the bad guys that save the day in my opinion. Usually its Harris and Proctor who are still good fun here but the trio of crooks are admittedly amusing. There is a really nice air of quality slapstick with these guys, especially the boss played by Rene Auberjonois whose obsession with his hair and nasal voice make for a perfect greasy bad guy. His two sidekicks are both kinda dumb and your standard heavy handed mobster types but there is a credible Three Stooges act going on there. This doesn't excuse a lot of childish crap though, you know they are starting to scrape the bottom of the barrel when they actually use a fart in the elevator joke. Then there's the old drugged unconscious gag with Harris, setting his straw hat on fire, writing 'dork' on his chest with sunblock and a really nasty 'Jaws' send up. The finale is yet again another chase sequence on water (clearly run out of ideas) with all the predictable stuff that you'd expect to see on water. Again it does look good as a visual spectacle as do most of the PA chase sequences, but its so very hollow and comes across more like a stunt man's show. Everything is tied up in a neat little bow with Lassard being allowed to carry on for another hundred years or so despite the fact he's useless and all is good with the world again. Its very very bland and very very hokey, most of it is performed and filmed like an instructional video on how to make (attempt) slapstick, but from the third film onwards we know that don't we. Despite all that its a fairly enjoyable romp and is certainly better than the fourth film, at least we get a breath of fresh air with the location. I do like how they do the films titles each time though, quite like this one in particular.

Not-so-fun in the sun. Being the fourth sequel in the series, it's not surprising this lacks the ingredients that made the first few films so funny. The script is a mess, the bad guys really corny and like something out of a second-rate Disney movie. Sure, it could be worse, but it's so obviously a product made just to cash in on its name. And you know it's a bad sign when a B-movie star like Steve Guttenberg declined to be in it. I'm gonna watch the last two as well, just to have seen them. But considering the state of this one, it'll be a miracle if I don't end up with any scars on my soul.

This was the worst Police Academy movie I've seen so far. Moving the setting of a series to Miami is usually a bad sign, I guess. Still it did have a couple of laughs, so I didn't rate it any lower.

Choosing plot over simply adding in numerous characters proves to be the downfall of the Police Academy series. Without Guttenberg there's no clear anchor for the film. We get the cliched and simple (though still charming) side characters in abundance. Matt McCoy tries to fill Guttenberg's shoes, but we're not buying it. Callahan gets a bit more screen time which is always nice, and a Miami setting does her character justice. The final scenes of the series have included foot chases, airplanes, jet skis.etc. So now we have a hovercraft chase. Gaynes has more to do, but people such as Winslow are just on repeat. It's amazing that they will try the kung-fu voice over joke 5 films in a row and expect it to work. Not a difficult watch, and it does have an alligator fight, but this vehicle is low on fuel.