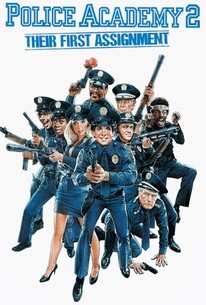 The first of six sequels to Police Academy, this sequel is even dumber than the original. Of course that is half the fun. This story begins as the misanthropic bunglers from the first film graduate and become rookie cops who inadvertently tear up the streets with their dopey (but still very popular) misadventures.

Morris Beers
as Crook
View All

They're not movies so much as variety shows featuring talented young comics.

The results of all this are, in fact, pretty funny; not as funny as the first film, but still pretty funny, anyway.

Nearly as much fun as the original corker

Watched it a little while ago and no where near as good as I remembered......one of the weakest in the series.

The first PA film I saw back when I was but a mere sprog and to this day I still think its probably the best of the bunch. Pretty much all the cast return for this assignment, well the main cast, and the story continues on from their graduation of the Police Academy. I do like that this film series manages to keep continuity time after time, gotta give kudos for that with such a big cast. The plot is again very simple, the new officers are all doing well in their respective roles but are called on to help Cmdt. Eric Lassard's brother. It seems his precinct is the worse in the city (unknown which city) thanks to a ruthless gang of thugs. So its up to the new rookie officers to clean up the neighbourhood, Academy style. So yes the story continues on from where the last left off which is good, the cast are all present and correct which is good and there are some new officers to enjoy in this new precinct. Again this film is still aimed towards an adult audience which assists it in being a much better comedy vehicle in my opinion. The old characters are on form and all doing their thing as expected, Mahoney still being a wet little goodie goodie, Tackleberry with his array of weapons etc...but they are now up against a new superior in the form of the excellent Art Metrano as Lt/Capt. Mauser. Now I really must give much kudos to Metrano here, this guy is even better than Bailey as Harris, in a different way. I really really liked this ass kissing slimebucket so much, the way he ridicules the new rookies, the way he bullies his sidekick Proctor and of course the way he kisses ass. The tomfoolery on show is even more outrageous and rude than the previous film with nudity, especially from Metrano, but this guy just makes it work. The way he screams out 'Proctor!!' and the way he verbally duels with Mahoney can be at times really funny. Lt. Mauser: 'Mahoney, what kind of clown do you think I am?' Mahoney: 'A juggling clown?' Kudos also to Lance Kinsey as Sgt. Proctor who is another fine example of a dimwitted sidekick. He doesn't do much apart from suck up to Mauser but its just the way he does it. Love the way he switches from a grovelling butt licker with Mauser, to trying to be a strong authority figure around the other officers. This duo are the best thing about this film and the franchise really. Chief Hurst: 'Mauser, you're the most incredible ass kisser I have ever seen.' Lt. Mauser: 'Thank you very much, sir. I do my best.' There are some other good new characters here too. Howard Hesseman as Capt. Peter 'Pete' Lassard actually puts in a good heart warming performance as the all round good guy Captain, one of the few actors giving the film some proper credibility. This film also has the great honour of introducing the insane Bobcat Goldthwait to the world as the infantile gang leader. Can't deny his performance is unique but I still do wonder about this guys mental makeup, and I still don't know if he actually talks like that in real life?. Small mention for the other odd looking character in Tim Kazurinsky as Sweetchuck who certainly gives a good show as an elderly little man, was he suppose to be elderly? Again the comedy duo of Sweetchuck and Zed is actually pretty good, cool that it continues into the third film too. Of course the humour is totally childish and puerile but I think by now we all know the game here don't we. Most of this film actually consists of the boys in blue doing something, Mauser sticking a spanner in the works and then Mahoney getting revenge with some silly prank. The best of which is easily the glue in the shower sequence which leads to Mauser wearing a wig for the rest of the film. So utterly immature yet quite a nasty thing to do lets be honest, but admittedly hilarious. Never let under age kids see this film because it is most definitely a bad influence, making dogs run out into heavy traffic?? errrr...keep the kids away! I think the start of the film is much better than the finale, the rookies getting to know Mauser and being shown the ropes etc...The ending does become a bit cartoonish with some nasty pratfalls and hokey ass gang member action, but when that musical score begins to swell you can't help but kinda enjoy it. Still not too sure why they have that 90 year old looking officer in the police station just sitting around, why would he be there??

This sequel isn't as good as the first, but it's still very funny and enjoyable, and I especially liked Goldthwait, he really makes this movie better than it would have been.

Always a comical watch and one of the best American comedy film series from the 80's. Memorable scenes and a good bunch of characters.