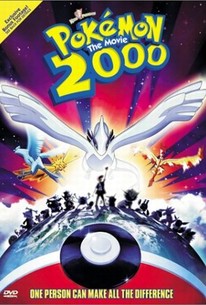 Critics Consensus: Despite being somewhat more exciting than the previous film, this kiddy flick still lacks any real adventure or excitement. What is does contain is choppy animation and poor voice acting. Doesn't match up to virtually anything out there.

Critics Consensus: Despite being somewhat more exciting than the previous film, this kiddy flick still lacks any real adventure or excitement. What is does contain is choppy animation and poor voice acting. Doesn't match up to virtually anything out there.

Critic Consensus: Despite being somewhat more exciting than the previous film, this kiddy flick still lacks any real adventure or excitement. What is does contain is choppy animation and poor voice acting. Doesn't match up to virtually anything out there.

In this action-packed anime film, fearless Pokemon trainer Ash Ketchum and his pals must try to save Earth from destruction. An evil collector schemes to procure three coveted Pokemon -- Moltres, Zapdos and Articuno -- whose capture will unleash mystical sentinel of the sea Lugia. When the villain snares the trio, nature gets thrown out of whack, causing a series of natural disasters. Can Ash and friends prevent an environmental cataclysm?

Critic Reviews for Pokémon - The Movie 2000

This freshly baked and frosted big-screen "Pokemon" goes down with a sweetness that charms without talking down to its audience.

A much more intense action vehicle for hero Ash Ketchum and his band of pocket monster trainers than its leaden, sometimes claustrophobic predecessor.

A few set-pieces, though, do stand out: weird, almost entirely spherical fish swimming in the water, a boat crashing down hundreds of steps, and a jagged 'chicken' lit up by golden electric energy are certainly transfixing.

Ugly animation, hackneyed plots, one-dimensional characters, and the Pokemon gibberish that makes the Teletubbies sound as if they were speaking the King's English.

The filmmakers have tried hard to come up with an original plot, but somehow this film is actually duller than the first Pokemon movie.

Slightly better than a poke in the eye.

Where other movies seem bound to treat kids like adults, "Pokemon" allows kids to be kids, and just enjoy a wholesome, entertaining, well thought-out animation.

Although the animation is crisp, the story is too apocalyptic to appreciate.

The perfect film for fans of the franchise... and no-one else. [Full review in Spanish]

Better than the first, but that's not saying much.

This is a fun, magical, and appealing movie that kids will love.

Lesson of the day: Pokémon are more attuned to nature, but one human can make a difference.

Audience Reviews for Pokémon - The Movie 2000

Despite the premise, Pokemon - The Movie 2000, is not really exciting like the series and become boring. The end is very violent, what could deviate the younger audience. Rotten.

Pokemon 2000 is 2000 times better than the original which was awful. It's still not that good though, it's good to entertain small children though. I'ts not good but its watchable.

A downgrade from the original, but with all of the characters back to love, a story about three legendary birds has never been more mesmerizing to me. As an evil mastermind is planning to rule the world with possession of these three birds, he must have one more bird to rule the world; Lugia. Ash and his pals must save the earth from total destruction before the madman takes over. This was an extremely enjoyable, family friendly film, it may not be the pokemon movie we have all been waiting for, but it certainly is an awesome animated feature.