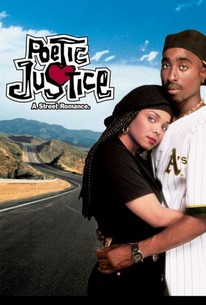 Critics Consensus: Poetic Justice is commendably ambitious and boasts a pair of appealing stars, but they're undermined by writer-director John Singleton's frustrating lack of discipline.

Critics Consensus: Poetic Justice is commendably ambitious and boasts a pair of appealing stars, but they're undermined by writer-director John Singleton's frustrating lack of discipline.

Critic Consensus: Poetic Justice is commendably ambitious and boasts a pair of appealing stars, but they're undermined by writer-director John Singleton's frustrating lack of discipline.

R&B star Janet Jackson made an impressive film debut in Poetic Justice as Justice, a hairdresser at a small salon in South Central Los Angeles. Justice uses her poetry to deal with her grief after her boyfriend is killed in a shooting incident at a drive-in. Hired to work at a hair stylists' event in Oakland, Justice is stranded when her car breaks down, until she remembers that her friend Ieasha (Regina King) was going to hop a ride down to Oakland with her boyfriend Chicago (Joe Torry), a postal worker who is heading there with a truck full of mail. Justice tags along to discover that Chicago's driving partner is Lucky (Tupac Shakur), the postman who delivers mail to her shop and keeps asking her out. Ieasha and Chicago have to deal with their own rocky relationship while Justice has to decide if she's ready for a new love -- and if Lucky is the man she's waiting for. Along with strong work from Jackson, Poetic Justice features a surprising turn from Shakur, whose nuanced performance as Lucky is in strong contrast to his "Thug Life" public persona. Justice's poems were written by Maya Angelou, who also appears in a small role. ~ Mark Deming, Rovi

Norma Donaldson
as Aunt May

Robi Reed-Humes
as Woman on Couch

Maia Campbell
as Shante
View All

After a deceptively funny and offbeat beginning, the movie keeps restarting; each new start shows some promise, and Singleton's talent never really deserts him-but the parts don't come together to create a unified story.

"Poetic Justice" is a disappointment.

"Poetic Justice" is thoroughly watchable. The director's script has bite, he is fluid with his camerawork and his eye and ear for details, particularly the details of female life, are superb.

Singleton splatters his ambition all over the screen; he mixes up violence, romance, comedy, rage, and - yes - poetry. Yet he barely demonstrates the discipline to shape a scene.

"Poetic Justice" has a lot to commend, but discipline is not high on the list.

An honorable failure, a flawed attempt to take black film out of the macho gangsta ghetto.

Outside of a certain demographic, it's just not going to hit the same way.

It was fine, I loved Janet Jackson, but for me watching it now, my brain is blank. it wasn't terrible, wasn't good, it was just there. Respect to a Black romantic drama revered in the community, but I'd rather watch Love & Basketball...

In short, the movie's pretty much of a mess, as it struggles with big themes but hasn't figured out what to do with them.

Its ambitious aims are commendable in themselves, but regrettable since they overinflate what might have been a simpler and better film.

If what you really want to see is a simple love story, this is the picture for you. Simple it is, as in simple-minded.

After making a big splash with his first film, Boyz N the Hood, John Singleton lost his way somewhat with this twee, right-on drama.

I had recorded this on dvr to watch. The times were out, so I missed the last 15 minutes. I wasn't overly disappointed about it. Is okay, but not my type of thing.

an engaging movie with a messed up ending. one forgets how good shakur was as an actor until you realize that he was a huge chunk of the good films of this genre in the early 90's.

Not one of Singleton's best, but the story was ok. The actors/singers placed to play the lead characters were a bit annoying, but Regina King was the best whom always get's into her role, and stole the show from the two main characters. Mayo Angelou's poems are great, which is quoted by Janet Jackson in this ok movie. I liked it and it was amusing, but they just did not bring out the roles as they should have.

=) I like this movie a lot....I love the song at the end by Janet Jackson, she did well in here as well as the late Tupac. =) They were cute.