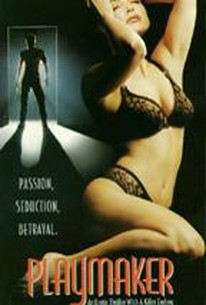 An actress takes a dangerous detour on the road to success in this suspense drama. Jamie (Jennifer Rubin) is a struggling starlet who is trying to win a role in an upcoming film called Playmaker. Eager to gain advantage on the competition, Jamie's pal Eddie (John Getz) says that he can arrange an introduction with Ross Talbert (Colin Firth), an acting teacher with a reputation for grooming top talent. Ross agrees to tutor Jamie for $5,000; she scrapes up the money, only to discover that his lessons are mainly exercises in psychological abuse. Jamie learns that a number of Ross' students who didn't respond to his techniques have turned up dead, and she spies an "F" next to her name in his grade book shortly before he attacks her with a knife; she grabs a gun and kills him. The police determine that Jamie acted in self-defense -- but the man who she's been taking lessons with wasn't the real Ross Talbert. Playmaker features an original score by Mark Snow.

There are no critic reviews yet for Playmaker. Keep checking Rotten Tomatoes for updates!

There are no featured audience reviews yet. Click the link below to see what others say about Playmaker!