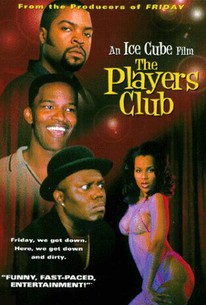 African-American single mother Diana aims for a career as a broadcast journalist. To finance her education Diana works as a stripper run by hustler Dollar Bill. When Diana's young cousin begins stripping at the club, people attempt to lead her into prostitution. Meanwhile Diana begins dating the club deejay.

Badja Djola
as The Doctor

Oren Williams
as Jamal at 4 Years

Jossie Thacker
as Stripper No. 1

Lalanya Masters
as Stripper No. 2

Ursula Y. Houston
as Dancer No. 2

Keith Burke
as Guy at Party
View All

Critic Reviews for The Players Club

Rich with colorful dialogue and characters, it's sometimes ungainly but never boring, and there's a core of truth in its portrait of exotic dancers.

... better than Showgirls * *But mister, please * *I'm afraid it falls a little bit short of Striptease.

Feisty, funky, sympathetic without being condescending to the bad hand dealt many single mothers, and rudely funny to boot.

A bit uneven but works a lot better as a serious drama than its individual ingredients would make it appear to be.

Audience Reviews for The Players Club

had some funny moments, but bot great by any means

Definitely a must have classic for your collection...A woman must come to terms against all odds in making a living. the jokes and the cast are real.