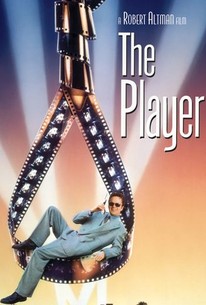 Critics Consensus: Bitingly cynical without succumbing to bitterness, The Player is one of the all-time great Hollywood satires -- and an ensemble-driven highlight of the Altman oeuvre.

Critics Consensus: Bitingly cynical without succumbing to bitterness, The Player is one of the all-time great Hollywood satires -- and an ensemble-driven highlight of the Altman oeuvre.

Critic Consensus: Bitingly cynical without succumbing to bitterness, The Player is one of the all-time great Hollywood satires -- and an ensemble-driven highlight of the Altman oeuvre.

Robert Altman's provocative satire of the movie industry stars Tim Robbins as Griffin Mill, an unscrupulous Hollywood studio executive who finds himself threatened not only by up-and-comer Larry Levy (Peter Gallagher) but by the stranger sending out postcards calling for Mill's death. Having concluded that the mysterious correspondent is screenwriter David Kahane (Vincent D'Onofrio), whose film treatment Mill rejected, the producer arranges a meeting that ends with Mill killing Kahane, resulting in a murder investigation.

Louise Fletcher
as Herself

Scott Shaw
as Himself (uncredited)
View All

News & Interviews for The Player

On DVD This Week: The Finest Hours, Zoolander 2, and More

View All The Player News

Critic Reviews for The Player

Hilarious and deadly, this may be Altman's most completely realized film since his glory days in the '70s.

[It's] supposed to be scathing, but the pleasure it affords is like what you get from watching the Oscars: celebrity spotting and in-jokes.

Mercilessly satiric yet good-natured, this enormously entertaining slam dunk quite possibly is the most resonant Hollywood saga since the days of Sunset Blvd. and The Bad and the Beautiful.

A movie about today's Hollywood -- hilarious and heartless in about equal measure, and often at the same time.

Mr. Altman's most subversive message here is not that it's possible to get away with murder in Hollywood, but that the most grievous sin, in Hollywood terms anyway, is to make a film that flops.

[Altman] sticks it to every target, himself and us included, with a wicked zest that hurts only when you laugh.

Altman structures the The Player like a film noir, but one that feels like a tune on a piano being played slightly off-key.

The Player, which Altman made after years of struggle, with all Hollywood fascination worn away, is Altman's dour version of Dante's Inferno. His satire forces us to realize the obscenity of Clinton-era corruption - once again.

In "The Player," Altman creates a scathing satire of Hollywood - and then lets his satire itself gets seduced by Hollywood schmaltz. Because what better way to show how seductive it is?

Altman knew Hollywood, but The Player casts a much wider net by allowing the movie industry to stand in for the shark-eat-shark nature of modern business in general

One of the great motion pictures of the 1990s.

Audience Reviews for The Player

Robert Altman uses his street cred to phone in a few favors, namely "will you be in my next film? You get to play yourself." There's a plot here, murder or something, some adultery, some lying, but it's way secondary to the taking of this over-an-hour-long Hollywood selfie that has so many cameos that you'll be wondering when a fresh face arrives onscreen if they're integral to the plot or simply another celeb strolling past the camera to wave at you. Behind the scenes, a idea for a film drama portraying "real life" is pitched, meant to have no stars in it at all to detract from focusing on the story. Guess what?

Brilliantly constructed comedy drama, The Player is a richly detailed effort, one that has a well layered story that keeps you involved because you are left wondering how this will end. Hearing great things about the film, I gave a shot, but at times I felt like it was a bit overrated. The Player is far from a bad film and what we have here is a very good picture that combines effective storytelling with wonderful acting. I enjoyed the film, and felt it was well done, and it definitely kept you on the very edge of your seat despite the lack of truly entrancing storytelling. To me, this is a film that works well enough to make you think hard, and you get sense of that when you watch the film, but at the same time you wonder why the film has gotten so much praise. Tim Robbins is as usual in top form here and he acts quite well and he's a wonder to watch here on-screen. The Player is one of those movies that tend to be overhyped, but once you see it you are left wanting a bit more as well. Don't get me wrong, I enjoyed the film, but I simply didn't enjoy it as much as what everyone did. This is an engrossing picture, but there is a few times where the film could have been improved upon. Overall, this is well worth seeing, and it's a film that merits recommendations despite its flaws.

Written by Michael Tolkin (based on his novel of the same name), this is Robert Altman's middle finger to Hollywood and its ethics (or lack thereof) about a jaded and smooth talking studio executive named Griffin Mill. mill spends most of his day listening to movie pitches, and is very callous when it comes to picking what his studio should green light. He's in danger of losing his job to an even slicker rival, and more importantly, he begins receiving death threats from a disgruntled screenwriter whom he shafted. Fed up, Griffin commits a little murder, and begins wooing the victim's lady. Things get even MORE shaky when he realizes he may have killed the wrong writer. This is a fairly scathing satire, but Altman said it's actually rather gentle. I was somewhat disappointed by this, as I had been lead to believe that this was a very bleak and ruthless look at the screwed up world of the Hollywood system. I still really enjoyed the movie, and I loved how Altman successfully bit the hand that fed him, but it just ended up being something a little different from what I was hoping for. Ironically, this was a big hit for the director, and it was part of his early 90s renaissance that revitalized his long but flailing career. The film has great production values, and is pretty intelligent with its aims. The legendary opening is a roughly 8 minute long take that tracks through the studio lot, weaving in and out of Griffin hearing various (and ridiculous) movie pitches. What really makes it shine is that it is a long take that makes several references to other famous long takes, and all of the dialogue was improvised. That's how you start a movie! The Player is also well known for having around 60 or so cameos by many well known entertainers, some for maybe just a second or two, with many of them appearance for little to no pay. I'm not going into all the details of who shows up, but trust me, there's plenty of recognizable faces. The main cast is where the film is also quite strong, with Tim Robbins's performance as Griffin being one of his best. Whoopi Goldberg and Lyle Lovett are also pretty good as two detectives who firmly believe that Mill is guilty, and will stop at nothing to prove it. I also really liked Peter Gallagher as Mill's rival. All in all, this is a really good film. It's a tad overrated, but still worth checking out, especially if you dig Altman, satires, and/or movies about movie making.