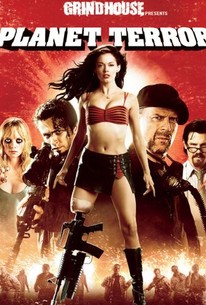 Maverick filmmaker Robert Rodriguez details the violent struggle between a ravenous army of zombie-like humanoids who have taken control of the planet and the remaining survivors who refuse to go down without a fight. A dangerous government experiment has unleashed an abominable contamination that turns normal people into murderous mutants. Now, as an infinitely multiplying horde of frenzied psychotics flood the Texas plains, a dangerous outlaw named Wray (Freddy Rodriguez), a sexy stripper named Cherry (Rose McGowan), an unscrupulous smuggler named Abby (Naveen Andrews), and the curiously incapacitated Dr. Dakota Block (Marley Shelton) must try and make their way to the helicopter that could provide their only means of escaping to a place untouched by this nightmarish scourge that threatens to wipe out all of humankind. This nonstop action-horror hybrid originally was released as part of Rodriguez and Quentin Tarantino's ambitious Grindhouse double bill. ~ Jason Buchanan, Rovi

Quentin Tarantino
as Rapist No.1

Electra Avellan
as Babysitter Twin No. 1

Elise Avellan
as Babysitter Twin No. 2

Greg Kelly
as Rapist No. 2

Cecilia Conti
as Paramedic No. 1

Tommy Nix
as Paramedic No. 2

Troy Robinson
as Soldier No. 1

Derek Southers
as Soldier No. 2

Geraldo Rivera
as Himself

Won't make any friends outside of B-movie aficionados, and even they might tire of laughing at all the cheapo gore being thrown around.

McGowan is a suitably slinky presence as the lead avenger with a machine gun for a leg; blood and pus regularly fill the screen as Rodriguez lets rip with gleeful abandon.

A loving testament to exploitation horror cinema and a moronic sop to a certain generation of male film fans' obsession with breasts, guns and gore.

Gloopy and outrageous, this schlock horror tribute is pure trash... in the best possible sense.

Aficionados will appreciate the po-faced wordplay and self-consciously gnarled-up aesthetic (missing reels, bad syncing, etc) as much as the fleshy centrepieces and gross-out grace notes. Others will struggle to find much appeal.

Packed with hot women, a ninja-like character and zombies, it's the kind of movie a 15-year-old would make with a limitless budget and little concern for ratings. Good thing he knows how to make an incredibly fun movie.

A first-rate homage to the schlocky, sleazy B-movies of decades past.

Rodriguez' part of the Grindhouse feature is clearly set in his well known crazy universe, with many of his usual cast suspects returning. The movie takes the used look of the B-film rolls somewhat too far, even has an intentional missing reel at the most inconvenient time and quite a lot of color mishaps. It also sets out to reach new records of disgusting scenes, breaking taboos by the minute: children shooting themselves in the head, (disturbingly hot) sex with one legged women, goo shooting from infection wounds and melting penises. That's almost a little much to stomach, but always countered with a similar kind of humor already used in his "From Dusk Till Dawn". But especially compared to that movie "Planet Terror" can't entirely live up to, neither to the more amusing "Death Proof". Still, there is plenty of fun to have with this film as well: It's nice to see Michael Biehn and Jeff Fahey again, there are some great lines and fun moves (especially by the wonderful Rose McGowan). I can't really say I would blame people who find this too disgusting or silly, though. Not for everyone, but the fans get what they demand.

A deadly plague that turns the populace into flesh eating mutants is released into the atmosphere and a band of misfits join together to fight their way to safety. Robert Rodriguez' pastiche of seventies and eighties style schlock horror seemed like a real breath of fresh air to me. The fact that two of its greatest exponents, Sam Raimi and Peter Jackson have been heading further and further down the overlong, sterile, technology orientated road of mainstream cinema makes it all the more ironic. Tarantino and Rodriguez seem to be headed completely in the opposite direction, concentrating on entertainment rather than ego and in this film they deliver just the right blend of tongue in cheek humour, knowing homage and outrageous gore the likes of which I haven't seen since Evil Dead 2. It's half John Carpenter and half George Romero, but manages to ape the films of their heydays to such an extent it surpasses anything either of them has done for a couple of decades. The cast overact their cinematic stereotypes to just the right degree and the gore is amusingly ridiculous in a similar way to Return Of The Living Dead, itself a tongue in cheek semi-sequel to Romero's original zombie film. It'll never change your world, but that's hardly the point. 100% proof pure entertainment.

VERY original, very cool, and very bloody. This and Death Proof make for a perfect pairing. PS.....a machine gun for a leg?! You know you have a winning movie!

It was a huge risk for Rodriguez and Tarantino making the grindhouse double feature and attempting to revive the genre, and I had low expectations from the start. But Planet Terror worked. I felt like I was watching a good old fashioned grindhouse movie like Rodriguez envisioned. It was bang right on the awareness level with a mix of totally tasteless gore combined with the grindhouse humour. It's a pretty decent film that was well executed and I felt like it belonged. I've never seen Tarantino's contribution "Death Proof" but I have great confidence that Planet Terror will be hard to top.