Plagues & Pleasures on the Salton Sea2004 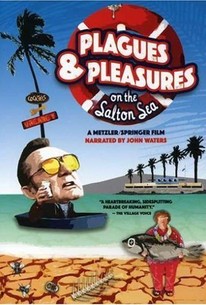 Critics Consensus: Plagues And Pleasures is a thoroughly engrossing account, both humorous and disheartening, of a once bustling community ravaged by ecological change and human greed.

Critics Consensus: Plagues And Pleasures is a thoroughly engrossing account, both humorous and disheartening, of a once bustling community ravaged by ecological change and human greed.

Critic Consensus: Plagues And Pleasures is a thoroughly engrossing account, both humorous and disheartening, of a once bustling community ravaged by ecological change and human greed.

John Waters narrates this quirky documentary about Southern California's Salton Sea, a man-made lake that was once considered a prime recreation location, but has turned into an ecological disaster. Directed by Chris Metzler and Jeff Springer.

Critic Reviews for Plagues & Pleasures on the Salton Sea

Plagues and Pleasures has a different style for a reason: It's a movie about the environment that isn't content with the good-bad dynamic of your average gloomy enviropic.

While the doc flounders as a coherent story of human folly, it's a cheeky travelmercial guaranteed to get the curious to make the road trip to this near-abandoned resort.

It makes for a strange, but somewhat endearing, melange of the grim and comic.

The movie is engaging for the way it documents the rise and fall of a semi-natural landmark, and especially for the way it shows how people still come to California to remake themselves.

Plagues and Pleasures is simultaneously fun and creepy, best appreciated by those who enjoy similar profiles of Detroit's crumbling grandeur.

Plagues & Pleasures is more than a cautionary tale about the dangers of messing with nature. It's about the rise and fall of a place, a classic story: think Camelot, or Rome, or maybe even planet Earth.

Plagues and Pleasures on the Salton Sea is funny and compassionate, but it shows us a future that could befall any American community that suddenly becomes economically unsound, or politically inconvenient.

Narrated by John Waters, Plagues and Pleasures on the Salton Sea is an odd bird -- wacky and poignant, funny and sobering, but this portrait of a forgotten paradise is a must-see.

Funny, tragic, and informative Plagues & Pleasures on the Salton Sea is an unforgettable portrait of a desert town turned into a sewer.

Audience Reviews for Plagues & Pleasures on the Salton Sea

Back at the beginning of the last century, mankind had some grandiose ideas and in several areas decided to play god while having no idea of the consequences. Plagues and Pleasures of The Salton Sea is a documentary of one such adventure. Seeing the fertile land of California's Imperial Valley going to waste do to a lack of water, the government decided to create a man-made tributary of the Colorado River that would feed the valley several hundred miles to the west. For a time this worked well and crops were grown in abundance, until a particularly rainy season poured far more water than the man-made tributary could hold. Funny thing, water seeks a low point, which was an area called The Salton Sink, an alkali bed some 200 ft below sea level. Before the tributary could be tamed, enough water rushed into the sink to form a sea 30 miles long and 20 miles wide. Not to worry, said the government, it's 110 degrees there in the summer, so it will evaporate in no time. Good thinking, except they forgot about all the run off from the Imperial Valley. So there you have it - a mistake that caused a huge inland sea (called a sea because the alkali bed it rests on gives it a high saline content). Developers were watching how Palm Springs grew from a sleepy berg to bustling upscale home of the stars and figured that they could do even better with the Salton Sea because it had something that Palm Springs didn't: water sports. So they stocked the sea with fish, built docks and boating ramps and said come on down and buy a lot. Again, this worked for a time and it looked like perhaps this would become the Riviera of the US (as it was advertised). Unfortunately, yet again there was a rainy year in the late 60's and.... The sea rose 10' and flooded everything. Oopsy. With potential buyers now wary of the next flood, the area fell into decay, which was further exasperated by several dry years in which the sea's saline content rose the point where the fish no longer had enough oxygen to survive - cut to the next scene with literally millions of fish lying dead on the shores, stinking to high heaven. But still there is a beauty to be found there, even today. Much of the sea has been labeled a wildlife habitat and it is a safe haven for hundreds of migrating bird species. The film points out that even with all the dams built along the Colorado River, the county of San Diego managed to push through regulations given them the right to siphon off billions of gallons each year, which will potentially impact the Salton Sea to the point where in 15 years it could very well go dry. Once again the politico's fail to learn from past mistakes (the entire history of the sea is one mismanagement after another), ignoring no only the impact on bird life but the impending ecological disaster of exposing a 600 sq mile alkali bed to the high winds of the area (think of salt blowing all over those green golf courses in Palm Springs, only 30 miles away). This is the point of the film - mankind's hubris in thinking that we can control the environment. This error of judgment is seen all over, from the damming of rivers (and subsequent loss of fish species) to the misguided attempts of the BLM in trying to control horse and wolf populations while ignoring natural selection). Along the way the film also introduces us to some of the wacky characters that still call the Salton Sea home. The area seems full of hermits and free thinkers - those outside the mainstream who can survive primarily by supping on the still abundant fish supply. The film intersperses live interviews along with historical footage in an enticing cocktail that I am glad I imbibed; though I admit that this topic may mean more to me since I've been down around that area many a time.