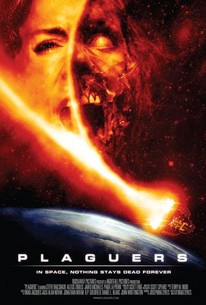 The crew of a spaceship fight for their lives after an alien energy source begins turning everyone aboard into rampaging mutants in this sci-fi shocker starring Steve Railsback. The year is 2241. Captain Holloway is the commander of the Pandora. She and her crew of six are transporting a form of alien fuel known as "Thanatos" to Earth when they receive a distress call from The Diana, a spacecraft that's become stranded amongst the stars. According to the distress call, space pirates have attacked the Diana, and the only remaining survivors are four nurses. But upon docking with the ship, Captain Holloway discovers the truth; the women who claimed to be nurses are in fact the pirates, and now they're about to take over the Pandora as well. Never one to go down without a fight, Captain Holloway instructs her crew to strike back with everything they've got. In the heat of battle, the container housing the "Thanatos" is ruptured, and one of the pirates is covered in the fuel. She's been infected, and now anyone she attacks will be infected, too. As the Pandora makes its way to Earth, Captain Holloway and her crew battle a horde of hungry mutants in a desperate effort to wipe out the "Plaguers" before they can wipe out all of humanity.

There are no critic reviews yet for Plaguers. Keep checking Rotten Tomatoes for updates!

There are no featured audience reviews yet. Click the link below to see what others say about Plaguers!