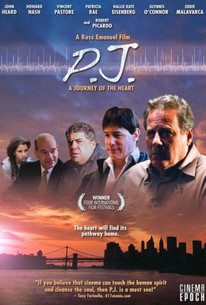 Retreating into himself after witnessing a tragic accident, a man who goes by the name P.J. (Howard Nash) is taken to a state-run hospital in Brooklyn, New York and placed under the care of the resident graveyard shift psychiatrist (John Heard). With the help of his assistant and his new patient's acrid ex-girlfriend (Patricia Rae), the concerned doctor does his best to break through to his distant new patient while simultaneously fighting to save his own marriage and reason with the strict supervisor (Robert Picardo) who would rather see P.J. permanently committed. Based on the award-winning play by Mark McQuown.

Eddie Malavarca
as Alex the Bookie

Joseph Stramandi
as Lombardi
View All

There are no critic reviews yet for P.J. (PJ). Keep checking Rotten Tomatoes for updates!

There are no featured reviews for P.J. (PJ) at this time.