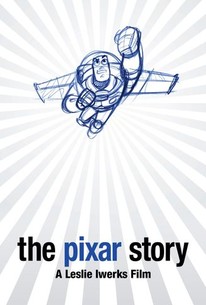 Famed cartoonist Ub Iwerks's granddaughter Leslie turns the camera lens on the artists and storytellers behind some of the most widely hailed animated films of the modern era in the in-depth documentary The Pixar Story. Featuring such key members as John Lasseter, Steve Jobs, and George Lucas, the doc tells the story of the company's humble roots all the way to being one of the biggest power players in Hollywood. Featuring unseen footage of early output from the studio, as well as a full overview of its many box-office successes and technological breakthroughs, Iwerks's film celebrates the artistic spirit that has pushed the boundaries of what animation can deliver, while staying true to the ideals that its parent company Disney once held so dear.

Stacy Keach
as Narrator
View All

Critic Reviews for The Pixar Story

The Pixar Story should be required viewing for film school students as it shows what following through and persevering through hardships can get you.

Iwerks may not have the gumption to pop open Pixar's hood and explore the mechanics, but she's created something warmly nostalgic and uplifting instead.

For a company promotional film, The Pixar Story is pretty tasty stuff.

Audience Reviews for The Pixar Story

Pixar films are wonderful, imaginative funny and memorable. More importantly, they can appeal to any age group. With this stunning documentary, we get the entire picture of the famous animation studio. We see the studio's humble beginnings to their in the world film. Every key player is interviewed here, and each gives terrific insight into Pixar's history. The film features snippet of interviews previously shown in Pixar: 25 Magic Moments, but it also features new interviews and much more in depth content into Pixar's history. This is a standout documentary, one that is very entertaining from start to finish and is really a well made documentary. Pixar have broken new ground in the way films are made. Pixar's story is one that was driven by motivation to do incredible things and they've succeeded in more ways than one. Their films are enjoyed by many, and each new feature that they have created has been better than the last one. Already films like Toy Story and The Incredibles are considered modern classics. The Pixar Story is an engaging documentary that is a must watch for fans of the studios films, and it offers plenty of insight into the creative progress on each film as well. This is a documentary that is well put together, one that is entertaining from start to finish and it presents the viewer with plenty of great insight into this incredible studio that have striven to make some astounding and pleasant feature films that anyone can enjoy. If you want to know much more about Pixar, The Pixar Story is a no brainer to watch. Like I said, it's well put together, thorough and in depth with its information. Well worth your time if you're a Pixar fan.

A documentary on the visionary studio of Pixar and how it came to be, there is little to say about this short sighted documentary. The film covers the history of the powerhouse studio, the people behind the films, and their reach into popular culture. The main reason this documentary doesn't oblige the audience's reservations is that the story of Pixar is far from over, and though successful doesn't yet warrant a history lesson on its origins. The process behind everything was interesting to see, and the warmth and love for animation, whether hand drawn or 3D, was exceptionally entertaining. These films cater more formally to the youthful mind and therefore the process is magical, yet overall the story isn't worth reciting to us. When the film looks solely at the people, the footage of those first years behind the helm of the biggest blockbuster studio in history, it's a whimsical look at a group of people who grew up with Disney and Warner Bros. as children. They want to make good films and let the public in on their formula for success so hand drawn animation will return to theaters along with character development and story structure. Director John Lasseter, the main focus of the film and the director of the first three of Pixar's biggest hits, is the most interesting person who is followed, as he commands respect as the founder of this technology and is the main mind between the studio. Other interesting cooks in this kitchen included George Lucas who helped shape Lasseter's frame of reference when he was working at Industrial Light and Magic, and Steve Jobs who lost much of his investments in the company and then rapidly gained them back when the company became an IPO. The film covers these people with flamboyant fun and altogether feel good attitudes, but the film runs out of steam fast after listing the studios' accomplishments and accolades. If this film was done ten years further into the future after the slight failure of Cars 2 and maybe more personal history of the animators it would have popped. If this film had been solely about the animators, their relationships with one another, and the ensuing joy of finishing the films it would have been far more memorable overall. A good look at Pixar, but Pixar wasn't ready to be documented.

Good documentary about the origins and rise of Pixar studio. It's interesting to see how they began, and were generally rejected by Hollywood,to become the leader in animation. The movie goes from their beginnings up to the creation of" cars". Would love to see a follow up in a few years as I'm sure the story behind some of their more current films is just as interesting. Seeing how they all work will make you wish you worked for Pixar. Good behind the scenes documentary.

A really good look into the history of this company. I recommend it for all the folks who like the movies they put out. I think it shows the reason for all the success they keep having with each film they produce. It's because they care about making a good film and not just about selling toys.