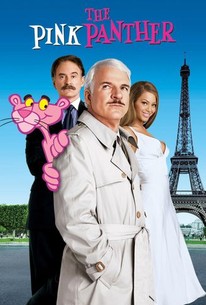 Critics Consensus: Though Steve Martin is game, the particulars of the Inspector Clouseau character elude him in this middling update.

Critics Consensus: Though Steve Martin is game, the particulars of the Inspector Clouseau character elude him in this middling update.

Critic Consensus: Though Steve Martin is game, the particulars of the Inspector Clouseau character elude him in this middling update.

A world-famous soccer coach has been murdered and his priceless, legendary ring has been stolen -- a ring set with the stunning diamond known as the "Pink Panther." The French government needs a master detective to solve the crime and recover the gem. But, he's not available, so they recruit none other than Inspector Jacques Clouseau. Who committed the crime: a stunning pop star, a soccer player, a Chinese assassin? - And, can anyone solve the case? Clouseau and his partner, Ponton, must unmask the murderer and keep their boss, Dreyfus, from taking credit for the victory -- all without bringing the French legal system to a screeching halt.

News & Interviews for The Pink Panther

View All The Pink Panther News

Critic Reviews for The Pink Panther

The plot, needless to say, is negligible.

As for Martin, no matter how many he times he stumbles, fumbles, burns his balls or mispronounces the word hamburger, he never gets close to making the Clouseau persona his own.

The Pink Panther moves Clouseau into the modern world while keeping the jokes older than dirt.

What is the point?

The most that can be said for this strenuously bland reconstitution is that Steve Martin was clearly alive during filming. But just how alive, unfortunately, is at issue.

For those who recall Sellers and the role he made famous, 'travesty' seems to be the right descriptor.

It has some interesting riffs on French/American clichés, but it isn't interested in creating something other than a string of gags.

The best that can be said about it is that Kevin Kline is note perfect as the smarmy, scheming Chief Inspector Dreyfus and his undisguised contempt for Clouseau.

From the witty franchise that Peter Sellers and director Blake Edwards made famous comes a pale offshoot that lacks sufficient tempo, tone and supporting characters to make it satisfying.

I hope nobody misunderstands when I say: Steve Martin, you are no Peter Sellers. And while I'm at it; Shawn Levy, you are no Blake Edwards.

Without a whit of subtlety, this tired retread induces nary a laugh, only groans of disbelief that we're expected to find such a sorry string of dumb puns, infantile farts, awful accents and endless pratfalls funny.

All of [Martin's] hard work does pay off

Audience Reviews for The Pink Panther

I resented the very idea of this from the beginning, even the suggestion, and so was pleasantly surprised when some of the nonsense actually garnered a hard earned smile from me. Reno as the second banana: a surprise. And Mortimer? Why didn't they give her more? Martin's behind the scenes too on the script, so this is essentially his baby, and its not as ugly as I thought it was going to be.

The Pink Panther is an awful and unnecessary remake of a classic comedy. Steve Martin is awful Clouseau. The film is terrible with bad acting and a bad attempt at comedy, this film fails at delivering anything clever to the screen. The Pink Panther is yet another remake that fails to hit the mark. I don't know what studio executives were thinking, but this film is a waste of time. Steve Martin is wasted here, and usually he's pretty funny, but not here. In this film, he is painfully annoying. The comedy doesn't work have the time, and the jokes feel lazy and uninspired. Steve Martin should've passed on this role, but he didn't. The Pink Panther is a horrible remake of a great classic. The jokes are childish and unfunny, and the film is forgettable. I hated this film because it offered nothing original and it was just a very bad rehash of the original. This film should've never been made, and this is a poor attempt at creating comedy. The Pink Panther falls flat in terms of bringing good, effective laughs. This is a film that you should avoid at all costs. There is absolutely nothing going on that will appeal to the fans of the original. I disliked this film, and is one of the worst comedy films that I had the misfortune to watch. An awful film with no direction, bad jokes and bad acting. This remake shouldn't have been made.

The Pink Panther diamond is missing.... And the world's greatest detective is solving the case one mistake at a time. Saw it again! Very funny movie! Beyonce was very sexy in this film. When the coach of the France soccer team is killed by a poisoned dart in the stadium in the end of a game, and his expensive and huge ring with the diamond Pink Panther disappears, the ambitious Chief Insp. Dreyfus assigns the worst police inspector Jacques Clouseau to the case. His intention is to give a diversion to the press, while he uses his best men to chase the killer and thief. He assigns Gendarme Gilbert Ponton to work with Closeau and inform each step of the investigation. When Clouseau is nominated with honor to the highest prize in France, Dreyfus decides to humiliate Clouseau and take him out of the case. However Clouseau has already solved the mystery.

Really stupid, Steve Martin can do better than this.