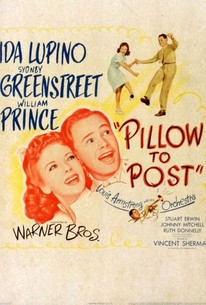 Yes, even Ida Lupino occasionally starred in screwball comedies during the 1930s and 1940s. Pillow to Post casts Lupino as free-spirited travelling saleswoman Jane Howard, who has trouble finding suitable lodgings during the wartime housing shortage. In order to secure a room at a motor camp catering exclusively to married servicemen, Jane pretends to be the wife of hapless young lieutenant Don Mallory (William Prince). Misunderstanding piles upon misunderstanding, and before long poor Mallory is facing a general court-martial. While Lupino pushes the envelope a bit in the leading role, the film's comedy content is also in the capable hands of Sidney Greenstreet, Stu Erwin and Willie Best. Pillow to Post is adapted from a stage play by Rose Simon Kohn.

Louis Armstrong
as Himself

Dorothy Dandridge
as Herself

John Miles
as Marine
View All

There are no featured reviews for Pillow to Post at this time.