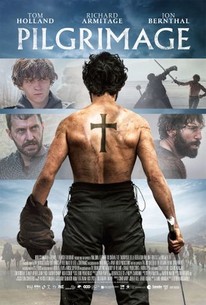 Ireland, 1209. A small group of monks begin a reluctant pilgrimage across an island torn between centuries of tribal warfare and the growing power of Norman invaders. As they escort their monastery's holiest relic to Rome, the true value of the bejeweled relic becomes dangerously apparent and their path becomes increasingly fraught with danger.

Jon Bernthal
as The Mute

For all its bloody and violent genre trappings, "Pilgrimage" is a gorgeously shot film that carefully renders the details of this fascinating historical period.

It's interesting as far as it goes, but you wish it would have gone farther.

As a bloody spectacle, the feature steadily builds in novelty and suspense to a queasily rousing final fight. As a meditation on the possible merits of such brutality, however, it's facile and self-satisfied.

It's an odd mixture of Sunday church and comics that probably should have chosen one or the other.

Here the filmmakers take a chance and turn a strange-seeming premise into a fast-moving tale.

This is one rough-and-tumble medieval Irish religious adventure, my friends.

It's a beautiful film with mystery and suspense, supported by a strong cast and great attention to details.

Ultimately, Pilgrimage is an unsatisfying film, one that winds up feeling pointless.

Pilgrimage is an average movie with above-average atmosphere and cinematography, thanks largely to the Irish landscapes where it was mostly filmed. It's also a movie that plods along into eye-rolling territory . . . .

The film finds a kind of transcendence as entrails are violated and lightning strikes with unsettling purpose, a meditative element that permeate one monk's spiritual journey from darkness to light to something for which he does not have a name.

Pilgrimage is rife with metaphors connecting the Dark Ages with contemporary issues, making us wonder if we've advanced as much as we think.

Set in the 13th century, Pilgrimage is about a group of monks who have to carry a powerful relic across Ireland to be sent to the Pope. Boasting of beautiful cinematography, Pilgrimage is brutal and gruesome from the get go. Great casting of some of the best actors, but the director missed an opportunity to deliver the nuances and depth of the dark side of religion corrupted by power.