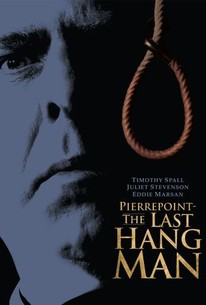 Critics Consensus: Director Adrian Shergold doesn't shy away from the darker elements of the movie's subject, and Timothy Spall is mesmerizing as the title character.

Critics Consensus: Director Adrian Shergold doesn't shy away from the darker elements of the movie's subject, and Timothy Spall is mesmerizing as the title character.

Critic Consensus: Director Adrian Shergold doesn't shy away from the darker elements of the movie's subject, and Timothy Spall is mesmerizing as the title character.

Following in the footsteps of his father and uncle before him, Albert Pierrepoint joins the "family business" in 1934. He rises through the ranks to become the most feared and respected executioner in the country, hanging more than 450 people in his lifetime. Living a double life as a master hangman, and a grocery deliveryman and loyal husband, Pierrepoint's obsession to become the "Number One" executioner in the country results in his selection as executioner for some of Britain's most infamous murderers and Nazi war criminals. But this brings notoriety, shattering Pierrepoint's guarded anonymity and turning him into a minor celebrity. When public opinion turns against capital punishment, Pierrepoint becomes a scorned man and is ready to give it all up, but fate has other plans in store for him. A devastating, true-life story of Albert Pierrepoint, Britain's most notorious hangman.

Critical Consensus: "Knocked Up" Is A Knockout; "Mr. Brooks," "Gracie" Less So

The key to the film is in the performances by Spall and Stevenson -- and by Marsan. The utter averageness of the characters, their lack of insight, their normality, contrasts with the subject matter in an unsettling way.

Grim and disturbing yet perversely riveting.

The movie grows more compelling in the latter half as British public opinion turns against capital punishment and Pierrepoint begins to have his own doubts.

The very title of this movie seems to message its doom. What could possibly be dramatic enough about Britain's last hangman to carry our interest over a 90-minute film? A whole lot, it turns out.

[The film's] grittiness instantly adds to the historically and socio-economically convincing picture of working-class Yorkshire in the last century.

Very much a bookend to Vera Drake in its mixture of post war British reserve and ugly reality. [Actor] Spall makes it work, creating a little man with big and terrible secrets.

A suitably sombre treatment of a sombre story, Pierrepoint is nevertheless a riveting drama, sketching out not only the salient facts of Albert Pierrepoint's life but the turmoil in which that life caused in his soul

Albert Pierrepoint single-handedly killed over 450 people in his career, dispatching most of them with an icy precision in less than 30 seconds.

Conceived as a television film, this recreation of the life and times of hangman Albert Pierrepoint is both unfalteringly grim and mesmerisingly watchable.

Spall is more than worthy of future leading roles.

Insightful character study of one of Britain's last executioners. In his lifetime, Albert Pierrepoint hung over 600 people, including several Nazi war criminals and Ruth Ellis (see Dance With A Stranger). Though he seemed outwardly detached, this film suggests that Albert's unusual profession eventually took a tremendous toll on his psyche and deeply impacted his personal life.

Excellent performances, particularly Timothy Spall in the lead, highlight this story. A man of deep compassion who was able to perform the job of executioner, feeling that they had already been judged, by looking at it as a duty and providing the condemned with as quick end as possible. Hardly a light entertainment this is more of a chamber piece for those who prefer realistic drama.

[font=Century Gothic]"Pierrepoint: The Last Hangman" is about Albert Pierrepoint(Timothy Spall), the real life hangman who in over 20 years on the job starting in 1932 executed hundreds of people. Following in the footsteps of his father, Pierrepoint sought to best him by becoming more efficient while also tenderly caring for the bodies after death.(His constant refrain is that the murderers have paid for their sins.) But no matter how much we may try to delude ourselves, there is no humane way to put someone to death.[/font] [font=Century Gothic][/font] [font=Century Gothic]With the countenance of an undertaker, Timothy Spall makes much of a rare chance to be the lead in this pointed character study that is especially interested in the dehumanizing effects of the death penalty, not only for the executioner but for us all. While excelling in its subtle approach for most of its length, the movie tries too hard to drive its point home towards the end, especially with a very predictable subplot. At the same time, the wonderful Juliet Stevenson is pushed further and further into thankless territory.[/font]

Wonderful! Timothy Spall is fabulous as a man performing what was at the time a necessary if highly immoral act.