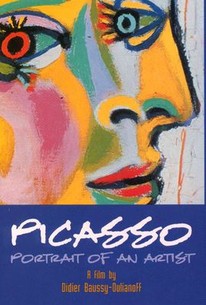 Anyone who has stood in front of the Guernica -- an artistic and humanitarian tour de force -- has caught a glimpse of the great passion and dazzling technique that are the heart of Pablo Picasso's legacy. His revolutionary and ever-changing style, no less than his tempestuous personality and notorious affairs, made him a cultural and popular icon -- one of the most influential figures of the 20th century. This film by director Didier Baussy-Oulianoff, part of the comprehensive Portrait of an Artist series, offers a closer look at Picasso's life, his creative process, and some of his most intensely personal works of art.

There are no critic reviews yet for Picasso. Keep checking Rotten Tomatoes for updates!

There are no featured reviews for Picasso at this time.