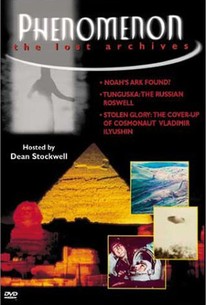 UFOs, ancient mysteries and future science; fifty years of government secrets kept, not only from our enemies, but from ourselves! "Phenomenon: The Lost Archives" is the first program to delve into the forbidden storeroom of lies, secrets and cover-ups used by powerful people and governments to keep the public in the dark. From the stolen journals of Nicola Tesla, to the anchors of Noah's Ark on the peaks of Mt. Ararat, to the 40 megaton explosion in the wastelands of Siberia. "Phenomenon: The Lost Archives" exposes the almost inconceivable stories of deceit, conspiracy, sanctioned piracy and scientific knowledge hidden from the world for far too long. Finally, all that you haven't seen about everything you shouldn't know. 13 one-hour episodes on a two disc set, hosted by Dean Stockwell. Episodes: Tunguska: The Russian Roswell; Noah's Ark Found?; Stolen Glory: The Cover-Up of Cosmonaut Vladimir Ilyushin; Follow Me: Anatomy of a Cult; Are We Alone in the Universe?; Abduction: A UFO Controversy; UFO Contact: The Truth is Stranger Than Fiction; UFO Top Secret: The U.S. Government's Secret UFO Research Project; Tesla: The Genius Who Lit the World; Tech Deception: Inside the U.S. Government's HARP Program; Free Energy: The Coming Energy Revolution; Phenomenon: The Footage Archives; Truth or Consequences: The Space Station Scam

There are no critic reviews yet for Phenomenon. Keep checking Rotten Tomatoes for updates!

There are no featured reviews for Phenomenon at this time.