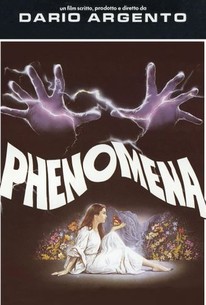 Similar to the theme about the young woman with psychic powers in Stephen King's Carrie, this above-par occult horror film stars Jennifer Connelly as Jennifer Carvino, a fragile-looking waif whose unusual power to control insects comes in handy when she is psychologically brutalized in a nightmarish Swiss boarding school. Two vicious teachers and students who constantly taunt her out of jealousy (her father is a famous movie star), make Jennifer's life at school an inferno. When she calls on her insect friends for help, the school becomes victimized by swarms of nasty flies. But in the meantime, more serious evil is afoot in the mountains: some sort of monster is murdering young girls and the only one who seems even close to catching the killer is a wheelchair-bound scientist who specializes in insects (Donald Pleasance). He has the bright idea of unleashing a "sarcophagus fly" that will find decaying corpses and thereby lead Jennifer to the dead victims and it is assumed, the killer as well. Director Dario Argento's trademark dream/nightmare sequences add their own horrific content to the story, and the few plot holes here and there are offset by some mind-numbing images that are expected by any cognoscenti of this genre.

RT on DVD: A Second Watchmen Movie and News of a Rambo Director’s Cut
The Weekly Ketchup: "Casino Royale" Goodies, "The Dark Knight" Heads East, No Governator In "Terminator 4," And More!

Between shots of stunning mountain scenery there are paranormal breezes, unfeasibly bright night-lighting and buckets and buckets of maggots.

The best acting is by an expressive, resourceful chimpanzee - definitely the year's Best Supporting Primate.

Phenomena is something like an amusement park ride that sails along pleasantly but uninterestingly, and then drops you fifty feet down. You know it's coming, but it's still quite a stomach-churning experience.

Phenomena may not be as consistent as Argento's masterpieces but it's frequently fantastic and deserves a reappraisal.

Though Argento's plot is often confused and grotesque, he has a remarkably energetic visual style (mobile camera, slow-motion, careful lighting, creative editing) that is never boring.

so over-egged is the story with police procedural, insect science and paranormal events that squaring the circle of all these clashing frames becomes a disorienting thrill with heady pleasures of its own.

Worth catching if you're a hardcore Argento fan. Otherwise, pass.

... Phenomena works best when viewed as a contemporary fairy tale.

If the Devil is the Lord of the Flies, what does that make Jennifer Connelly as a disturbed teenager who can telepathically communicate with the buzzing buggers?

Phenomena (a.k.a. Creepers) provides what is alternately Argento's most batty and spiritual landscape.

The first 4/5ths of this movie were pretty slow, but once she becomes lady of the flies, gets chased by a mutant 4 year old and gets aided by a razor-wielding chimpanzee, well it's like coming home again.

ridiculously over the top in every way possible, i guess u could say it's the culmination of argento's work as it seems to even verge on self-parody. a very young jennifer connelly stars as a boarding school student with a strange affinity for insects who is enlisted to help track down a serial killer. from there things only get wackier and after a certain point i just could not look away, dumbstruck by the audacity. too much iron maiden but the ending(s) are worth waiting for

A brilliant exercise in surreal madness, Phenomena is a return to Argento's to themes explored in his 1977 film Suspiria. The film has a dark, brooding atmosphere that really brings a sense of dread in the viewer. This is a stunning work of horror, one that pushes the boundaries of terror. With a brilliant cast lead by Jennifer Connelly and Donald Pleasence that deliver great performances, Argento crafts a strong film that is among the best films of 1980's horror. The film is void of any real logic. This is an eccentric work of terror, and is among the most bizarre films that have come out in the Italian genre of horror. Also this is one of the most accomplished films of the maestro's Dario Argento knows how to manipulate your deepest fears, and Phenomena is a surrealistic nightmare that grabs you by the neck and doesn't let go till the unforgettable climax. A standout aspect of this film is the soundtrack, it adds so much more to the experience of this film, and it's one of the most memorable themes in an Argento film yet. Phenomena was along with 1987's Opera the peak of Dario Argento's directing career. This film has all the trademarks of the famed horror director, and he crafts a film that is unrelenting in delivering terror. This is a stunning accomplishment in the horror medium. This is a must see for fans of the director. The film combines the supernatural with stylish murders, which has long been a trademark of Dario Argento, and you have a horror film that remains one of the directors' strongest efforts. Phenomena is a brilliant, stunning piece of horror cinema that is essential viewing for horror fans. This is a horrifying thrill ride that Argento himself has dubbed "his most personal film.