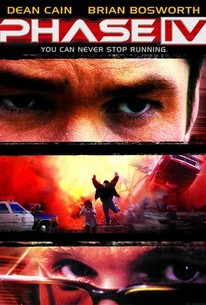 Dean Cain, formerly of television's Lois & Clark, stars opposite ex-NFL player Brian Bosworth in this straight-to-video action flick from director Bryan Matthew Goeres. Cain plays a reporter whose latest investigation leads him to a string of deaths that may or may not be murders. When he connects the recently departed to an experimental drug, his snooping starts to rub some shady folks led by Bosworth the wrong way. Can he blow the lid of the story before the bad-guys blow his lid off? Mimi Kuzyk also stars.

There are no critic reviews yet for Phase IV. Keep checking Rotten Tomatoes for updates!

There are no featured audience reviews yet. Click the link below to see what others say about Phase IV!