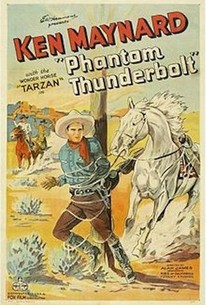 Rivalry between two towns for the honor of becoming county seat turns violent in this interesting Ken Maynard Western from low-budget Sono Art-World Wide. Although a notorious troublemaker, the Thunderbolt Kid (alias Ken Peters (Maynard)), is convinced to work on behalf of Coyote Gulch, a small community hoping to land the railroad franchise that will make it the county seat. Rival town Spotted Horse hires the notorious Matthews gang and soon it is all-out war between the communities. Ken, meanwhile, is conned by Matthews henchman One Shot Mallory (Bob Kortman) into attacking a stage supposedly carrying reinforcement. Unfortunately, the passenger, whom Ken publicly humiliates, is railroad president Charles Eaton (Wilfred Lucas). Much to the disgust of Red Matthews (William Gould) and his gang, Eaton awards the franchise to Coyote Gulch. After a climactic encounter between Red and Ken, Eaton persuades the latter to remain and witness the town prosper. ~ Hans J. Wollstein, Rovi

Tarzan the Horse
as Tarzan

Horace B. Carpenter
as townsman

There are no critic reviews yet for Phantom Thunderbolt. Keep checking Rotten Tomatoes for updates!

There are no featured audience reviews yet. Click the link below to see what others say about Phantom Thunderbolt!