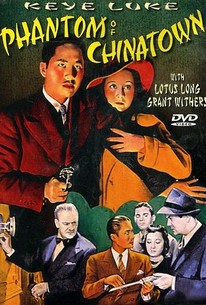 This is the final entry in the six-episode "Mr. Wong" series of mysteries, and it is the first time that Hollywood cast an Asian actor to play an Oriental detective. The role of Wong, previously played by Boris Karloff, was assigned to Chinese actor Keye Luke, the former 'Number One Son" from the "Charlie Chan" series. The story centers on Wong's search for both the killer of a noted archaeologist and a stolen Mongolian parchment.

Willy Castello
as Jonas
View All

Critic Reviews for Phantom of Chinatown

Typical story in the series.

Audience Reviews for Phantom of Chinatown

There are no featured audience reviews yet. Click the link below to see what others say about Phantom of Chinatown!