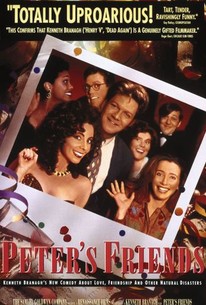 This comedy drama, a sort of British version of The Big Chill (1983), was directed by Kenneth Branagh. Ten years after they were members of a music and comedy troupe at Cambridge University, a diverse group of friends in their early 30s gather at the expansive estate of Peter Morton (Stephen Fry), who's invited them there for a reunion. Among the guests are Andrew (Branagh), who has married Carol (Rita Rudner), the star of the American situation comedy he writes; lonely Maggie (Emma Thompson), who thinks she may be in love with Peter; Roger (Hugh Laurie) and Mary (Imelda Staunton), a couple in advertising who have lost a child; and single Sarah (Alphonsia Emmanuel), who's always attracted to the wrong men, including her latest boyfriend, the married Brian (Tony Slattery). Also on hand is Vera (Phyllida Law, the real-life mother of Thompson), a housekeeper who has protectively watched over Peter since childhood. Over the course of the weekend, various jealousies and fears are revealed between joyous feasts, but a startling, tragic announcement from Peter puts everyone's petty dramas into proper perspective. American stand-up comedienne Rudner wrote the screenplay with her husband, (Martin Bergmann).

Hetta Charnley
as Woman at Airport

Annie Davies
as Brenda, the Babysitter

The clever, facile Peter's Friends doesn't bear much scrutiny, and its attempts at pathos are more opportunistic than earned. Still, Branagh knows how to put on a lively show.

Many of the lines and the shadings brought to them by these expert performers are good for some laughs, and pic has plenty of energy, but it can't be taken as seriously as it wants to be.

Most will guess the pay-off, but it's an amiable enterprise.

Although it addresses AIDS more directly than many films have, it remains a lightweight entertainment, enjoyable mostly for the fun of hearing arch, skillful actors deliver droll remarks.

Mostly a hodgepodge of stale show-biz stereotypes mixed with the brand of schmaltzy emotionalism that can be bought off the rack of any store on Rodeo Drive.

With a smattering of one-liners, and a dash of ironic spirit, "Peter's Friends" is a diverting, if modest affair.

What felt sincere and reassuring in 1992, seems indulgent and stilted today.

Anyone else who is going to require a bit of preparatory jollying up should probably avoid this production.

Only the most dedicated Anglophile with an unnatural devotion to the privileged classes could embrace "Peter's Friends" with unreserved fervor.

stephen fry is a great actor, and should act more

A terrific ensemble, breath of fresh air for Branagh

I've been meaning to watch this film ever since reading its review on a Microsoft Cinemania '95 CD... it's very much a product of its time with the 80s soundtrack reminding me of discos from the early 90s. A bunch of thespians playing thespians; there's not much to describe with giving the plot away - worthwhile if you're a fan of Branagh & Thompson or Fry & Laurie.

I do not have the linguistic faculties to express how much I hate this film. Luvvy infested unfunny, pretentious crap.