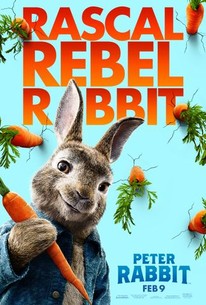 Peter Rabbit, the mischievous and adventurous hero who has captivated generations of readers, now takes on the starring role of his own irreverent, contemporary comedy with attitude. In the film, Peter's feud with Mr. McGregor (Domhnall Gleeson) escalates to greater heights than ever before as they rival for the affections of the warm-hearted animal lover who lives next door (Rose Byrne). James Corden voices the character of Peter with playful spirit and wild charm, with Margot Robbie, Elizabeth Debicki, and Daisy Ridley performing the voice roles of the triplets, Flopsy, Mopsy, and Cottontail.

More than anything, Gluck seems bored with the material, and worried that his audience will be too. Unfortunately, making the action more frenetic only adds to the sense of desperation.

I found neither blackberrygate nor Corden particularly offensive, and the film as a whole quite fun.

The new Peter Rabbit film could only really be improved with the addition of one thing: unfortunately, it's myxomatosis.

When, oh when will someone take the twee merchandisable ickiness of Beatrix Potter's great creation Peter Rabbit and turn it into a sassy live-action animation like Babe or Alvin and the Chipmunks?

In an era when so many animated features are so cloying, the slapstick, malice and offbeat humour here can't help but seem bracing and refreshing.

Will Gluck's high-speed digimation romp is best whenever it stops still, even screeches still, to comment tartly on the iconic. Not just iconic-Potterish; also iconic-proverbial.

Irreverent laugh out loud family fun that's not really for the Beatrix Potter purists but an enormously entertaining outing nonetheless.

'Peter Rabbit' is a recommended option to watch with the family. [Full Review in Spanish]

Peter Rabbit is far from your garden-variety kiddie distraction.

[A] loud, cynical, and ultimately dull reimagining of a classic children's work that seems content to trample all over its inspiration.

A breathless, dizzyingly joyous adventure that brings some seriously intelligent skill to these classic hare-brained characters.

It's not a good movie... It was weirder than I thought it was going to be.

A decent enough adaptation of the classic books. There's a lot here for adults and children to enjoy overall.

Delightful and charming. Peter Rabbit is not perfect, but certainly kept the children rocking with laughter as they watched the naughty rabbit cause mayhem in MacGregor's garden. The animation is impressive and almost seamlessly weaves into live action, and then into Beatrix Potter's classic water colours. Enjoyed the poignant backstory reflections of Peter's father without being overly melodramatic. A fun film even for the adults.

Fired Up!: Hilarious! Easy A: Hilarious and Charming. Even better! Man, this guy is on a roll... Friends With Benefits: Meh. Annie: Uh oh. Peter Rabbit: Who are you, Will Gluck? ...I liked it more than I probably care to admit...